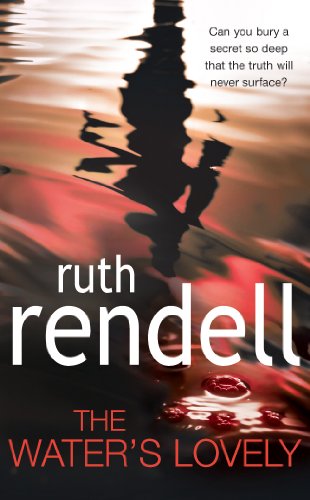 The Water's Lovely
by Ruth Rendell

In Stock
£4.49
She and her mother would be climbing the stairs, following Heather's lead through the bedroom to what was on the other side, not a bathroom in the dream but a chamber floored and walled in marble. But as their love lives start to develop, someone is murdered along the way, and long buried suspicions re-emerge with potentially tragic results.
Very Good
11 in stock

The Water's Lovely by Ruth Rendell

'Weeks went by when Ismay never thought of it at all. Then something would bring it back or it would return in a dream. The dream began in the same way. She and her mother would be climbing the stairs, following Heather's lead through the bedroom to what was on the other side, not a bathroom in the dream but a chamber floored and walled in marble. In the middle of it was a glassy lake. The white thing in the water floated towards her, its face submerged, and her mother said, absurdly, "Don't look!"' The dead man was Ismay's stepfather, Guy. Now, nine years on, she and her sister, Heather, still live in the same house in Clapham. But it has been divided into two self-contained flats. Their mother lives upstairs with her sister, Pamela. And the bathroom, where Guy drowned, has been demolished. But Death will rear its ugly head once more... Ismay and Heather get on well. They always have. They never discussed the changes to the house, still less what had happened that August day. But as their love lives start to develop, someone is murdered along the way, and long buried suspicions re-emerge with potentially tragic results.

"Ruth Rendell is excellent at catatonia. She revels in the menacing potential of stillness, the sinister heft of the inanimate object. In this cool yet engrossing novel, life's miscellanea . . . threaten to unmask awful secrets. The suspense is genteel, but palpable . . . Rendell is in full control of her craft here. She places motives, possibilities, or question marks with forensic precision throughout the story . . . Impressively, she draws characters with great economy, unpicks and sustains them through a well-timed and smoothly executed story." * Sunday Times *
"The quality of the writing is as high as ever, and so too is Rendell's control of the narrative, which sweeps along in short, tart sections." * Spectator *
"Rendell coaxes her horrors along so seductively that all kinds of nastiness seem not only possible, but inevitable" * Literary Review *
"Once again, she has broken with the traditions of crime fiction, that it should engage the mind rather than the emotions" * Sunday Times *
"Ruth Rendell is back to her creepy best. She has always been wonderful at exploring the dark corners of the human mind, and the way private fantasies can clash and explode into terrifying violence" * Daily Mail *

GOR000289989
The Water's Lovely by Ruth Rendell
Ruth Rendell
Used - Very Good
Paperback
Cornerstone
2007-04-14
416
0099504278
9780099504276
N/A
Book picture is for illustrative purposes only, actual binding, cover or edition may vary.
This is a used book - there is no escaping the fact it has been read by someone else and it will show signs of wear and previous use. Overall we expect it to be in very good condition, but if you are not entirely satisfied please get in touch with us.