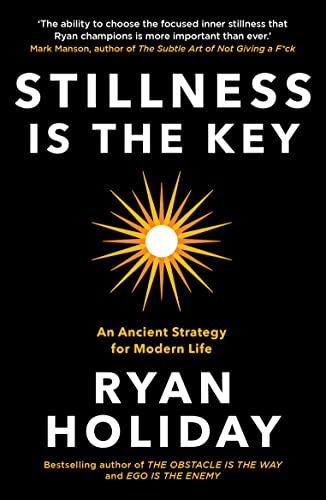 Stillness is the Key by Ryan Holiday

Stillness is the Key: An Ancient Strategy for Modern Life by Ryan Holiday

Throughout history, there has been one quality that great leaders, makers, artists and fighters have shared. The Zen Buddhists described it as inner peace, the Stoics called it ataraxia and Ryan Holiday calls it stillness: the ability to be steady, focused and calm in a constantly busy world. Drawing on a wide range of history's greatest thinkers, Holiday shows us how crucial stillness is, and how it can be cultivated in our own lives today. Just as Winston Churchill, Oprah Winfrey and baseball player Sadaharu Oh have done, we can all benefit from stillness to feed into our greater ambitions - whether building a business or simply finding happiness, peace and self-direction. Stillness is the key to the self-mastery, discipline and focus necessary to succeed in this competitive, noisy world.
The ability to choose the focused inner stillness that Ryan champions is more important than ever. -- Mark Manson #1 Bestselling author, * The Subtle Art of Not Giving a F*ck *
Ryan Holiday is among the most psychologically wise writers I know. ... If you struggle to find your center in the increasingly noisy and frenetic world, then this book is for you. -- Angela Duckworth, bestselling author * Grit *
Some authors give advice. Ryan Holiday distills wisdom. This book is a must read. -- Cal Newport, New York Times bestselling author * Digital Minimalism *
Don't be fooled. Within the pages of this unassuming little book lie a life-changing idea: that in order to move forward, we must learn to be still. Ryan Holiday has done it again. -- Sophia Amoruso, cofounder and CEO, Girlboss
Whether you are an athlete, an investor, a writer or an entrepreneur, this little but soulful book will open the door to a healthier, less anxious and more productive life and career. -- Arianna Huffington
Ryan's trilogy of The Obstacle is the Way, Ego is the Enemy and Stillness is the Key are for sure must-reads. -- Manu Ginobili, 4x NBA champion and Olympic Gold Medalist
In the world today the dangers are many-most notably, the endless distractions and petty battles that make us act without purpose or direction. In this book, through his masterful synthesis of Eastern and Western philosophy, Ryan Holiday teaches us all how to main tain our focus and presence of mind amid the sometimes over whelming conflicts and troubles of twenty-first-century life. -- Robert Greene, New York Times bestselling author * The 48 Laws of Power *
A timely, vividly realized reminder to slow down and harness the restorative wonders of serenity. -- Kirkus Reviews
Ryan Holiday is one of the brilliant writers and minds of our time. In Stillness Is the Key he gives us the blueprint to clear our minds, re charge our souls, and reclaim our power. -- Jon Gordon, bestselling author * The Energy Bus *
Ryan Holiday is a national treasure and a master in the field of self-mastery. In his most compelling book yet, he has mined both the classical literature of the ancient world and cultural touchstones from Mister Rogers to Tiger Woods, and brought his learnings to us in terms that the frantic, distracted, overcaffeinated modern mind can understand and put to use. Highly recommended. -- Steven Pressfield, bestselling author * The War of Art *
Highly recommended. Great read. -- CJ McCollum, Portland Trailblazers
Praise for Ryan Holiday: '[Ryan is a] self-help sage, who is now a sought-after guru to NFL coaches, Olympians, hip-hop stars, and Silicon Valley entrepreneurs . . . [he] translates Stoicism, which had counted emperors and states men among its adherents during antiquity, into pithy catchphrases and digestible anecdotes for ambitious, twenty-first-century life hackers. -- Alexandra Alter * New York Times *
The next Malcolm Gladwell. Ryan Holiday's just brilliant. -- Lance Armstrong
Holiday is an out-of-the-box thinker who likes to take chances. * New York Times Book Review *
I don't have many rules in life, but one I never break is: If Ryan Holi day writes a book, I read it as soon as I can get my hands on it. -- Brian Koppelman, screenwriter and director, * Rounders, Ocean's Thirteen, Billions *
Ryan Holiday is one of the most promising young writers of his gen eration. -- George Raveling, Hall of Fame basketball coach, Nike's director of international basketball
Ryan Holiday is one of the world's foremost thinkers and writers on ancient philosophy and its place in everyday life. He is a sought-after speaker, strategist, and the author of many bestselling books including The Obstacle Is the Way; Ego Is the Enemy; and The Daily Stoic. His books have been translated into over 30 languages and read by over two million people worldwide. He lives outside Austin, Texas, with his family.
NGR9781788162067
9781788162067
1788162064
Stillness is the Key: An Ancient Strategy for Modern Life by Ryan Holiday
Ryan Holiday
New
Paperback
Profile Books Ltd
2020-10-08
288
N/A
Book picture is for illustrative purposes only, actual binding, cover or edition may vary.
This is a new book - be the first to read this copy. With untouched pages and a perfect binding, your brand new copy is ready to be opened for the first time
Trustpilot