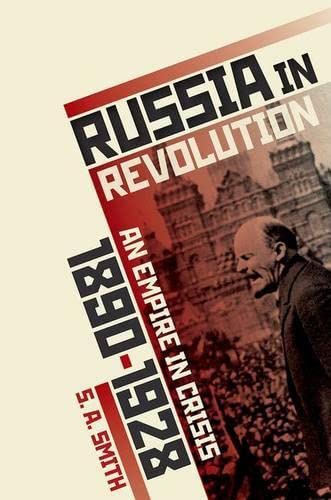 Russia in Revolution
by S. A. Smith

Out of Stock
£5.99
A panoramic account of the Russian empire from the last years of the nineteenth century, through revolution and civil war, to the brutal collectivization and crash industrialization under Stalin in the late 1920s
Very Good
Only 0 left

The Russian Revolution of 1917 transformed the face of the Russian empire, politically, economically, socially, and culturally, and also profoundly affected the course of world history for the rest of the twentieth century. Now, to mark the centenary of this epochal event, historian Steve Smith presents a panoramic account of the history of the Russian empire, from the last years of the nineteenth century, through the First World War and the revolutions of 1917 and the establishment of the Bolshevik regime, to the end of the 1920s, when Stalin simultaneously unleashed violent collectivization of agriculture and crash industrialization upon Russian society. Drawing on recent archivally-based scholarship, Russia in Revolution pays particular attention to the varying impact of the Revolution on the various groups that made up society: peasants, workers, non-Russian nationalities, the army, women and the family, young people, and the Church. In doing so, it provides a fresh way into the big, perennial questions about the Revolution and its consequences: why did the attempt by the tsarist government to implement political reform after the 1905 Revolution fail; why did the First World War bring about the collapse of the tsarist system; why did the attempt to create a democratic system after the February Revolution of 1917 not get off the ground; why did the Bolsheviks succeed in seizing and holding on to power; why did they come out victorious from a punishing civil war; why did the New Economic Policy they introduced in 1921 fail; and why did Stalin come out on top in the power struggle inside the Bolshevik party after Lenin's death in 1924. A final chapter then reflects on the larger significance of 1917 for the history of the twentieth century - and, for all its terrible flaws, what the promise of the Revolution might mean for us today.

About S. A. Smith

Steve Smith is a historian of modern Russia and China, who was a graduate student at both Moscow State University and at Peking University. He is the author of many books and articles on the Russian and Chinese revolutions, including Red Petrograd: Revolution in the Factories, 1917-18 (CUP, 1983) and Revolution and the People in Russia and China: A Comparative History (CUP, 2008), and is editor of The Oxford Handbook of the History of Communism (OUP, 2014). He taught for many years at the University of Essex, where he is an honorary professor, and then at the European University Institute in Florence, before being elected to a senior research fellowship at All Souls College, Oxford, in 2012.

GOR008250785
Russia in Revolution: An Empire in Crisis, 1890 to 1928 by S. A. Smith
S. A. Smith
Used - Very Good
Hardback
Oxford University Press
2017-01-26
472
0198734824
9780198734826
Winner of Winner of the PEN Hessell-Tiltman Prize for History 2018 Winner of the 2017 BASEES Alexander Nove Prize.
Book picture is for illustrative purposes only, actual binding, cover or edition may vary.
This is a used book - there is no escaping the fact it has been read by someone else and it will show signs of wear and previous use. Overall we expect it to be in very good condition, but if you are not entirely satisfied please get in touch with us.