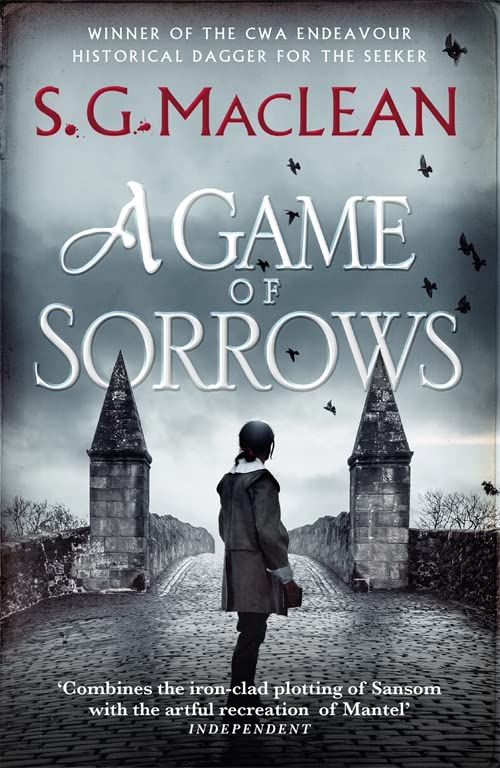 A Game of Sorrows
by S.G. MacLean

Used Price
£4.79
New RRP £8.99
Free Shipping in the UK
Second historical thriller in the Alexander Seaton series sweeps the hero back to his roots in Ulster, and a family living under a curse and riven with long-held secrets
Reviews:
Trustpilot
Very Good Good Well Read

A Game of Sorrows Summary

A Game of Sorrows: Alexander Seaton 2, from the author of the prizewinning Seeker historical thrillers by S.G. MacLean

Second historical thriller in the Alexander Seaton series sweeps the hero back to his roots in Ulster, and a family living under a curse and riven with long-held secrets

Alexander Seaton's happily settled life as a university teacher is shattered by the arrival in town of a stranger who looks like his twin and who carries a plea for help from Alexander's dead mother's family in Ireland. The family has been placed under a poet's curse, threatening death to various members. Elements of the curse have already begun to play out.

Reluctantly answering the call, Seaton travels to Ulster, to find himself among a family torn apart by secrets and deep resentments.

As he seeks out the author of the curse, he becomes deeply entangled in a conflict that involves fugitive priests, displaced poets, rebellious plotters and agents of the king. Confronted by murder within his family, he finds the lines between superstition and faith, duty and loyalty are becoming increasingly blurred, while his Scottish homeland grows ever more remote.

Customer Reviews - A Game of Sorrows

A Game of Sorrows Reviews

S.G. MacLean has a PhD in history from Aberdeen University, specializing in sixteenth and seventeenth century Scottish history. She lives in Conon Bridge, Scotland with her husband and four children. She has written four highly acclaimed historical thrillers set in Scotland, The Redemption of Alexander Seaton, A Game of Sorrows, Crucible and The Devil's Recruit. Her latest series of historical thrillers is set in Oliver Cromwell's London. The first book in the series, The Seeker, won the CWA Endeavour Historical Dagger and the second, The Black Friar, was longlisted for the same award. Follow her on Instagram @iwritemybike2

GOR002201333
A Game of Sorrows: Alexander Seaton 2, from the author of the prizewinning Seeker historical thrillers by S.G. MacLean
S.G. MacLean
Alexander Seaton
Used - Very Good
Paperback
Quercus Publishing
2010-09-02
416
1849162441
9781849162449
N/A
Book picture is for illustrative purposes only, actual binding, cover or edition may vary.
This is a used book - there is no escaping the fact it has been read by someone else and it will show signs of wear and previous use. Overall we expect it to be in very good condition, but if you are not entirely satisfied please get in touch with us.