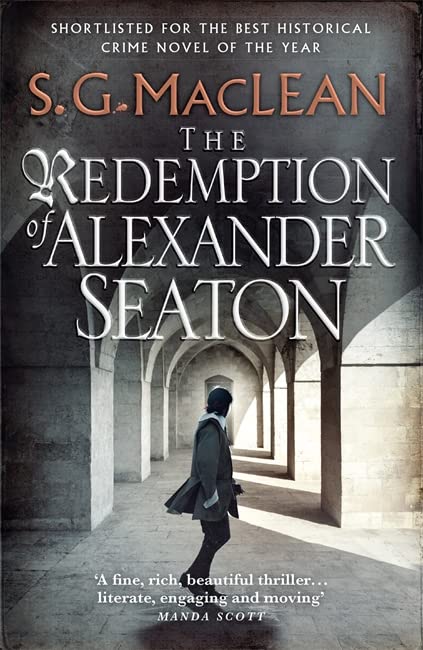 The Redemption of Alexander Seaton
by S.G. MacLean

Used Price
£4.19
New RRP £8.99
Free Shipping in the UK
A sleuth to rival Shardlake or Cadfael - a mystery that will chill your blood. A must-read for fans of Rory Clements and SJ Parris.
Reviews:
Trustpilot
Very Good Good Well Read

The Redemption of Alexander Seaton Summary

A sleuth to rival Shardlake or Cadfael - a mystery that will chill your blood. A must-read for fans of Rory Clements and SJ Parris.

Banff, Scotland, the 1620s. A young man walks unsteadily through the streets. Is he just drunk or is there something more sinister happening? When he collapses in front of two sisters on that dark, wet night, the women guess that he's been poisoned.

His body is discovered in the house of Alexander Seaton - a fallen minister, the discovery of whose clandestine love affair has left him disgraced.

Why was the body in Seaton's house? And why would anyone want to murder this likeable young man? Seaton sets out to find answers, embarking on a journey not only through the darkest part of other men's souls, but also his own.

The Redemption of Alexander Seaton Reviews

'Such is the quality of the recreation, not only of the reeking ebb and flow of everyday life but also of the period mindset that it's easy to believe Satan is walking abroad ... this is an accomplished and thought-provoking debut' Guardian. * Guardian *

S.G. MacLean has a PhD in history from Aberdeen University, specializing in sixteenth and seventeenth century Scottish history. She lives in Conon Bridge, Scotland with her husband and four children. She has written four highly acclaimed historical thrillers set in Scotland, The Redemption of Alexander Seaton, A Game of Sorrows, Crucible and The Devil's Recruit. Her latest series of historical thrillers is set in Oliver Cromwell's London. The first book in the series, The Seeker, won the CWA Endeavour Historical Dagger and the second, The Black Friar, was longlisted for the same award. Follow her on Instagram @iwritemybike2

GOR001331601
The Redemption of Alexander Seaton: Alexander Seaton 1: Top notch historical thriller by the author of the acclaimed Seeker series by S.G. MacLean
S.G. MacLean
Alexander Seaton
Used - Very Good
Paperback
Quercus Publishing
2009-05-07
416
1847247911
9781847247919
N/A
Book picture is for illustrative purposes only, actual binding, cover or edition may vary.
This is a used book - there is no escaping the fact it has been read by someone else and it will show signs of wear and previous use. Overall we expect it to be in very good condition, but if you are not entirely satisfied please get in touch with us.