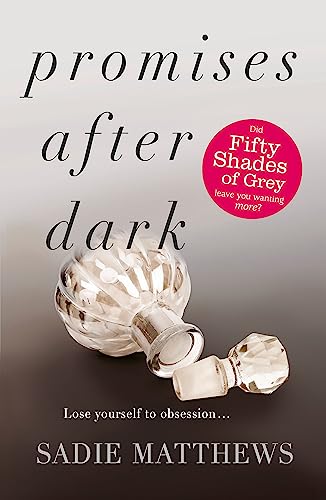 Promises After Dark (After Dark Book 3)
by Sadie Matthews

In Stock
£5.49
The final part of the provocative romantic trilogy that has left readers aching for more.
Very Good
8 in stock

Intensity, sensuality, and seduction awaits in the final part of the provocative romantic AFTER DARK trilogy that has left readers longing for more.

Can a fractured love be salvaged?

Parting with Dominic has left me broken in a way I could never have imagined. We held elation in the palm of our hands, but one misunderstanding brought it crashing down around us. Now the hurt and sadness follows me like a shadow and makes choosing the right path to take impossible.

But one moment with him and the pulsing heat is singing in my blood again; his touch lights a fire that my body refuses to ever forget. I'm hopelessly lost in him. Finding our way back to one another will take trust and a leap of faith - only then we will know whether we have a chance at forever.

If you were consumed by the first two books in the series, PROMISES AFTER DARK will not disappoint... This is a pleasure we should all indulge in.

'Sadie has a lovely, easy style of writing that makes the story flow so easily as it process along the ups and downs of the couples new relationship, that you really feel part of their world. Without the hint of repetition and wonderfully left open for a sequel, Fire After Dark is an intense and passionate book, that is perfect for those who tentatively want dip their toes into the exciting world of BDSM.' * www.handwrittengirl.com *
This book is written at such an easy pace which allowed me to finish the whole book in one evening! I would definitely describe this book as sexy, sassy and exciting and I did find I was hooked * www.reabookreview.blogspot.co.uk on FIRE AFTER DARK *

Sadie Matthews is the author of provocative, romantic novels that explore an intense and intimate side of life and relationships. The After Dark series was her first trilogy, and entranced readers with its sensual, engrossing story and unforgettable characters. The Seasons trilogy is her latest series, telling the story of the Hammond sisters.
Sadie Matthews is married and lives in England. Find Sadie on Twitter at www.twitter.com/sadie_matthews.

GOR004578400
Promises After Dark (After Dark Book 3): After Dark Book Three by Sadie Matthews
Sadie Matthews
After Dark
Used - Very Good
Paperback
Hodder & Stoughton
2013-02-28
384
1444775871
9781444775877
N/A
Book picture is for illustrative purposes only, actual binding, cover or edition may vary.
This is a used book - there is no escaping the fact it has been read by someone else and it will show signs of wear and previous use. Overall we expect it to be in very good condition, but if you are not entirely satisfied please get in touch with us.