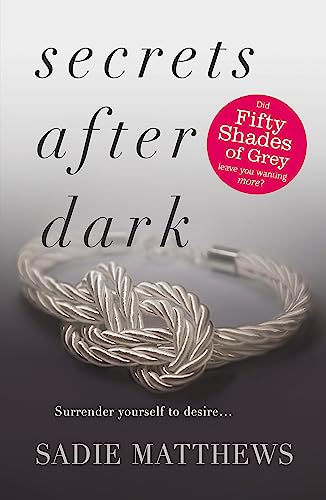 Secrets After Dark (After Dark Book 2)
by Sadie Matthews

In Stock
£5.99
SECRETS AFTER DARK will take you one step closer to the bittersweet edge of passion: the perfect read for fans of Fifty Shades of Grey by E. L. James, Sylvia Day and Nikki Gemmell.
Like New Very Good Good
Only 1 left

Secrets After Dark (After Dark Book 2): Book Two in the After Dark series by Sadie Matthews

Ours was a love bound by power...

Falling in love with Dominic changed me. I relinquished myself completely and placed my heart and my trust in Dominic's hands, but in one exquisite, excruciating moment he abandoned his control. Anguished by his actions, he has locked those darkest desires inside, unable to share my conviction that it would never happen again.

Now it's not only Dominic who craves that delicate, seductive game of give and take, of walking the line between pain and pleasure, abandon and release. Persuading Dominic to let those secret parts of himself unravel will be the biggest risk I've ever taken, but I can't resist. Even if it means we fall apart...

Provocative and sophisticated, exhilarating and seductive, the AFTER DARK series is a compelling pleasure we should all indulge in . . .

'This series definitely offers something a little different from the wealth of intense, contemporary romances out there with characters much more deeply flawed than the norm and a twisting story that constantly surprises. It's well written and every scene comes vividly to life with the descriptive narrative.' * sinfullysexybooks.blogspot.co.uk *
'Sadie has a lovely, easy style of writing that makes the story flow so easily as it process along the ups and downs of the couples new relationship, that you really feel part of their world. Without the hint of repetition and wonderfully left open for a sequel, Fire After Dark is an intense and passionate book, that is perfect for those who tentatively want dip their toes into the exciting world of BDSM.' * www.handwrittengirl.com on FIRE AFTER DARK *
This book is written at such an easy pace which allowed me to finish the whole book in one evening! I would definitely describe this book as sexy, sassy and exciting and I did find I was hooked * www.reabookreview.blogspot.co.uk on FIRE AFTER DARK *

Sadie Matthews is the author of provocative, romantic novels that explore an intense and intimate side of life and relationships. The After Dark series was her first trilogy, and entranced readers with its sensual, engrossing story and unforgettable characters. The Seasons trilogy is her latest series, telling the story of the Hammond sisters.
Sadie Matthews is married and lives in England. Find Sadie on Twitter at www.twitter.com/sadie_matthews.

GOR010509704
Secrets After Dark (After Dark Book 2): Book Two in the After Dark series by Sadie Matthews
Sadie Matthews
After Dark
Used - Like New
Paperback
Hodder & Stoughton General Division
2012-11-22
384
1444766708
9781444766707
N/A
Book picture is for illustrative purposes only, actual binding, cover or edition may vary.
This is a used book - there is no escaping the fact it has been read by someone else and it will show signs of wear and previous use. Overall we expect it to be in very good condition, but if you are not entirely satisfied please get in touch with us.