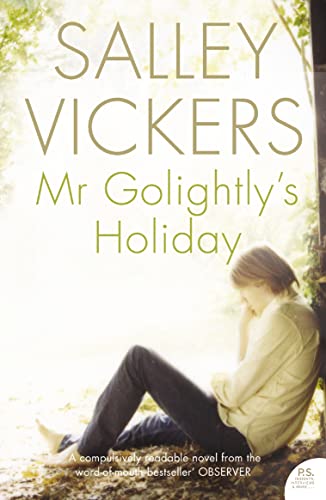 Beautifully rejacked edition of this wonderful novel from the best-selling author of `Miss Garnet's Angel' and `Instances of the Number 3'.

Beautifully rejacked edition of this wonderful novel from the best-selling author of `Miss Garnet's Angel' and `Instances of the Number 3'.

Many years ago Mr Golightly wrote a work of dramatic fiction which grew to be an international best-seller. But his reputation is on the decline and he finds himself out of touch with the modern world.

He decides to take a holiday and comes to the ancient village of Great Calne, hoping to use the opportunity to bring his great work up to date. But he soon finds that events take over his plans and that the themes he has written on are being strangely replicated in the lives of the villagers he is staying among.

He meets Ellen Thomas, a reclusive artist, young Johnny Spence, an absconding school boy, and the tough-minded Paula who works at the local pub. As he comes to know his neighbours better, Mr Golightly begins to examine his attitude to love, and to ponder the terrible catastrophe of his son's death. And as the drama unfolds we begin to learn the true and extraordinary identity of Mr Golightly and the nature of the secret sorrow which haunts him links him to his new friends.

Mysterious, light of touch, witty and profound, `Mr Golightly's Holiday' confirms Salley Vickers's reputation as one of our most original and engaging novelists.

`As profound as it is immensely readable.' Mariella Frostrup, BBC Radio 4 Open Book

`Full of charm.' Independent on Sunday

`Salley Vickers is a writer whose subtle intelligence and unobtrusive command of narrative I always enjoy. She sees with a clear eye and writes with a light hand, and she knows how the world works; and these qualities are much rarer than they should be. She's a presence worth cherishing in the ranks of modern novelists.' Philip Pullman

`Few novelists would dare tackle the theme of Salley Vickers's third novel; fewer still would pull it off so triumphantly. I am speechless with admiration.' John Julius Norwich

Salley Vickers divides her time between London and Venice. Previously a university lecturer in English, when not writing she practices as a psychologist and still lectures widely on the connections between literature, psychology and religion.

GOR000405419
Mr Golightly's Holiday by Salley Vickers
Salley Vickers
Used - Very Good
Paperback
HarperCollins Publishers
2004-05-04
368
0007156480
9780007156481
N/A
Book picture is for illustrative purposes only, actual binding, cover or edition may vary.
This is a used book - there is no escaping the fact it has been read by someone else and it will show signs of wear and previous use. Overall we expect it to be in very good condition, but if you are not entirely satisfied please get in touch with us.