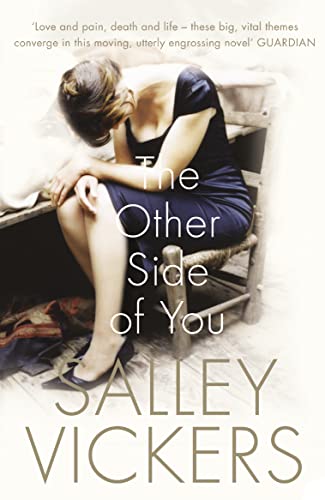 The Other Side of You
by Salley Vickers

The brilliant new novel from the bestselling author of `Mr Golightly's Holiday' and `Miss Garnet's Angel'.

The Other Side of You Summary

The Other Side of You by Salley Vickers

The brilliant new novel from the bestselling author of `Mr Golightly's Holiday' and `Miss Garnet's Angel'.

'There is no cure for being alive.' Thus speaks Dr David McBride, a psychiatrist for whom death exerts an unusual draw. As a young child he witnessed the death of his six-year-old brother and it is this traumatic event which has shaped his own personality and choice of profession. One day a failed suicide, Elizabeth Cruikshank, is admitted to his hospital. She is unusually reticent and it is not until he recalls a painting by Caravaggio that she finally yields up her story.

We learn of Elizabeth Cruikshank's dereliction of trust, and the man she has lost, through David's narration. As her story unfolds, David finds his own life being touched by a sense that the 'other side' of his elusive patient has a strange resonance for him, too.

Set partly in Rome, `The Other Side of You' explores the theme of redemption through love and art, which has become a hallmark of Salley Vickers's acclaimed work, which includes `Mr Golightly's Holiday' and `Miss Garnet's Angel'.

The Other Side of You Reviews

`There is something rare and special about Vickers as a novelist. In exploring the connections between faith and imagination, art and redemption, religion and science in an intelligent, unusual but very readable way, she manages to touch something buried deep in all of us. It gives her work a quietly compelling quality.' Peter Stanford, Independent

`Kindred spirits and soul mates are at the heart of Salley Vickers' new novel set in a South Coast psychiatric institution and in Rome...This is a fine and multi-layered novel which suggests that suffering is necessary and that opportunities for happiness should be taken whenever offered.' Daily Mail

`Love and pain, death and life, self knowledge and insensibility - all these big, vital themes converge in this moving, utterly engrossing novel.' Guardian

`The lives of the characters in this gently absorbing novel continue to resonate with the failures, possibilities, regrets and redemptions - consoled and mirrored by art - that we all endure.' Carol Ann Duffy, Telegraph

Salley Vickers is the author of the bestselling `Miss Garnet's Angel', `Instances of the Number 3' and `Mr Golightly's Holiday'. She has worked as a university teacher of literature and a psychoanalyst. She now writes full time.

GOR010472966
The Other Side of You by Salley Vickers
Salley Vickers
Used - Like New
Paperback
HarperCollins Publishers
2007-03-01
320
0007165455
9780007165452
N/A
Book picture is for illustrative purposes only, actual binding, cover or edition may vary.
The book has been read, but looks new. The book cover has no visible wear, and the dust jacket is included if applicable. No missing or damaged pages, no tears, possible very minimal creasing, no underlining or highlighting of text, and no writing in the margins.