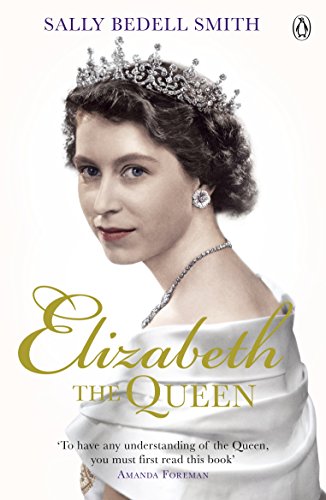 In Stock
£3.99
A portrait of Elizabeth the Queen. It provides access to the Queen's personal letters, close friends and associates. It also provides fresh insights on her public persona and her private life. It lets us see Queen Elizabeth going about her daily duties, preparing for formal occasions, playing with her children at the Palace, and more.
Very Good
Only 3 left

Elizabeth the Queen: The real story behind The Crown by Sally Bedell Smith

An intimate portrait of Her Majesty the Queen, from the moment a young Princess Elizabeth discovered her destiny to becoming our longest-serving monarch nine decades later. This definitive biography of Queen Elizabeth II is the first all-round, up-close picture of one of the most fascinating, enigmatic and admired women in the world. With exclusive access to the Queen's personal letters, close friends and associates, this intimate biography is a treasure trove of fresh insights on her public persona and her private life. Here we see Queen Elizabeth going about her daily duties, preparing for formal occasions, playing with her children at the Palace, crawling on her stomach to stalk deer, donning yellow Marigolds to wash up after Balmoral cookouts, and even changing a car wheel. Here we, at last, get to meet the leader, strategist, and diplomat; the daughter, wife, mother and grandmother - Elizabeth the Queen.

Sally Bedell Smith offers her readers the illusion of knowing the queen as a friend * The Economist *
The book has much to recommend it, being extensively researched, fluently written and containing quite a lot of intriguing "new" information * The Telegraph *
A worthy addition to the shelves of royal watchers everywhere * Sunday Independent *
Incisive... well researched * Choice Magazine *
A thoroughly good read * Daily Mail *

Sally Bedell Smith is the author of the bestselling biographies of Diana, Princess of Wales, John and Jacqueline Kennedy, Bill and Hillary Clinton, Pamela Churchill Harriman and Bill Paley. A contributing editor at Vanity Fairsince 1996, she previously worked at Time and The New York Times, where she was a cultural news reporter. Sally is the mother of three children and lives in Washington, D.C. with her husband, Stephen.

GOR003614159
Elizabeth the Queen: The real story behind The Crown by Sally Bedell Smith
Sally Bedell Smith
Used - Very Good
Paperback
Penguin Books Ltd
2012-02-02
688
0718158652
9780718158651
N/A
Book picture is for illustrative purposes only, actual binding, cover or edition may vary.
This is a used book - there is no escaping the fact it has been read by someone else and it will show signs of wear and previous use. Overall we expect it to be in very good condition, but if you are not entirely satisfied please get in touch with us.