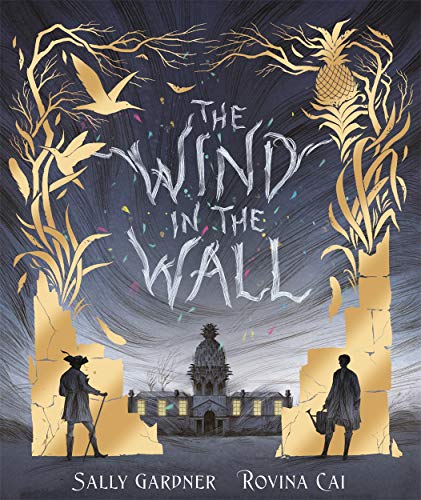 The Wind in the Wall
by Sally Gardner

The Wind in the Wall Summary

The Wind in the Wall by Sally Gardner

'I have no idea how long I have been incarcerated in these ancient walls . . . Let me explain how I find myself in this predicament . . .' Set in the hot houses of a stately home in eighteenth century England, a gardener falls from grace when the Duke sets him the impossible task of growing prize pineapples fit to show off in high society. The gardener's star falls further when he is replaced by Mr Amicus, a pineapple 'specialist', whom he believes to be a charlatan and a trickster - but nevertheless miraculously produces fruit to delight the Duke. Determined to uncover Mr Amicus's tricks, the gardener sneaks into the pineapple house to uncover the mysterious shrouded birdcage Mr Amicus carries with him. And what he finds changes his life for ever . . . A cautionary tale with echoes of myth and fairy tale, this bewitching fable will make you careful what you wish for.

Customer Reviews - The Wind in the Wall

The Wind in the Wall Reviews

A powerful and enigmatic fable steeped in magic and mystery, thick with the scent of tropical fruit, massaged egos, tragic love and nefarious deeds. * Read it, Daddy *
The Wind in the Wall is a strange book at first: you are unsure where the tale is going to take you, but this is what I enjoyed as there is intrigue and mystery throughout. With foundations in fairytales, folklore and myth, the story enchants the reader and I found myself hypnotised by the accompanying ethereal illustrations. The story is set in the eighteenth century when high society lauded those that could produce tropical fruit and flowers. The gardener of a large estate is set a task of growing pineapples but when he fails, a 'Mr Amicus' is brought in who proves to be suspicious and conniving. Spurred on by Mr Amicus's success with the fruit and with strange lights emanating from the greenhouse, the gardener is tempted to spy on the growing process and uncovers a secret that proves dangerous. This book will be devoured quickly by older readers due to the short prose and stunning illustrations: this is no bad thing. Students today need books just like this to entrance and distract them from the pressures of exams and set texts. Reluctant readers as well will be able to complete the book easily, gaining confidence and using the illustrations to enhance the text. A short, beautifully illustrated book like this to read at lunch time could work wonders and is a must for school libraries. I hope this signifies a change in publishing and recognises the importance of illustrated books for older children and young adults. -- Lorraine Ansell
You are swept away by what happens, but at the same time you don't really know for sure what's going on. Just as we loved our childhood picture books, The Wind in the Wall enchants the adult reader. * Bookwitch *
Australian artist Rovina uses a palette of greys, yellows, greens and browns, experimenting with light and dark backgrounds. Graphite pencil work creates the flickering wisps of movement to evoke an atmosphere of mystery and myth. Smoky tendrils signify a sinister undercurrent as the pages turn. It is a cautionary tale which explores the raw emotions of jealousy and passion. -- Tanja Jennings * The School Librarian *

Sally Gardner is a multi-award-winning novelist whose work has been translated into more than twenty-two languages. Her novel MAGGOT MOON (Hot Key Books) won both the Costa Children's Book Prize and the Carnegie Medal 2013, and was followed by THE DOOR THAT LED TO WHERE. Sally's genre-defying novel THE DOUBLE SHADOW (Orion) received great critical acclaim and was also longlisted for the Carnegie Medal 2013. THE RED NECKLACE (shortlisted for 2007 Guardian Book Prize) and THE SILVER BLADE are set during the French Revolution, the film rights for which have been purchased by Dominic West. Sally also won the 2005 Nestle Children's Book Prize for her debut novel I, CORIANDER. She is also author of the popular WINGS & CO Fairy Detective Agency Series and TINDER, illustrated by David Roberts (Orion). Most recently she has published a novel for adults, AN ALMOND FOR A PARROT. Follow Sally at www.sallygardner.net or on Twitter: @TheSallyGardner Rovina Cai is an international award winning illustrator who works across a variety of genres. Her poetic imagery has served as book covers, and as interior art for magazines, novels and picture books. Always up for a challenge, her work has also found some unusual applications, like appearing in a video game promotion, and on illustrated scarves. Rovina graduated from the MFA Illustration as Visual Essay program at the School of Visual Arts in New York City. Her work has been recognised with gold awards from publications like Spectrum Fantastic Art, and been accepted into juried competitions like the Society of Illustrators annual.