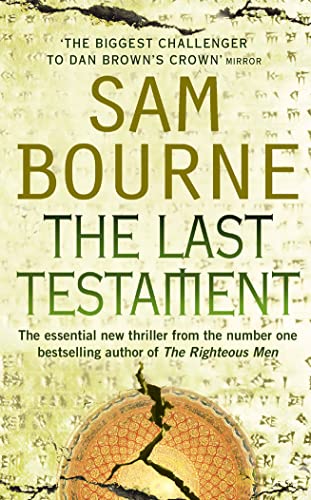 The Last Testament
by Sam Bourne

From the Number One bestselling author of The Righteous Men comes this staggering religious conspiracy thriller. The Last Testament: It was written. It was lost. It will save us all.

The Last Testament by Sam Bourne

From the Number One bestselling author of The Righteous Men comes this staggering religious conspiracy thriller. The Last Testament: It was written. It was lost. It will save us all.

April 2003: as the Baghdad Museum of Antiquities is looted, a teenage Iraqi boy finds an ancient clay tablet in a long-forgotten vault. He takes it and runs off into the night ...

Several years later, at a peace rally in Jerusalem, the Israeli prime minister is about to sign a historic deal with the Palestinians. A man approaches from the crowd and seems to reach for a gun - bodyguards shoot him dead. But in his hand was a note, one he wanted to hand to the prime minister.

The shooting sparks a series of tit-for-tat killings which could derail the peace accord. Washington sends for trouble-shooter and peace negotiator Maggie Costello, after she thought she had quit the job for good. She follows a trail that takes her from Jewish settlements on the West Bank to Palestinian refugee camps, where she discovers the latest deaths are not random but have a distinct pattern. All the dead men are archaeologists and historians - those who know the buried secrets of the ancient past.

Menaced by fanatics and violent extremists on all sides, Costello is soon plunged into high-stakes international politics, the worldwide underground trade in stolen antiquities and a last, unsolved riddle of the Bible.

Praise for `The Righteous Men':

`Compulsive reading ... successfully blends ancient teachings with the highly charged ways of the 21st century ... bears all the hallmarks of a blockbuster' Daily Express

Sam Bourne is the pseudonym of Jonathan Freedland, an award-winning journalist and broadcaster. He has written a weekly column for the Guardian since 1997, having previously served as the paper's Washington correspondent. For nearly two decades he has covered the Middle East conflict and in 2002 he chaired a three-day dialogue between Israelis and Palestinians, sponsored by the Guardian. The participants in that meeting went on to broker the 2003 Geneva Accords.

In the annual What the Papers Say Awards of 2002 Jonathan Freedland was named Columnist of the Year. This is his second novel: his first, `The Righteous Men,' was a Number 1 bestseller in the UK and has been translated into 28 languages. He lives in London with his wife and their two children.

GOR000289064
The Last Testament by Sam Bourne
Sam Bourne
Used - Very Good
Paperback
HarperCollins Publishers
2007-07-02
576
0007203330
9780007203338
N/A
Book picture is for illustrative purposes only, actual binding, cover or edition may vary.
This is a used book - there is no escaping the fact it has been read by someone else and it will show signs of wear and previous use. Overall we expect it to be in very good condition, but if you are not entirely satisfied please get in touch with us.