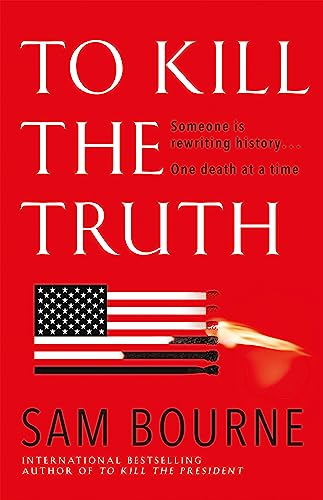 To Kill the Truth
by Sam Bourne

Used Price
£4.49
New RRP £7.99
Free Shipping in the UK
Taut, authoritative and explosive, To Kill the Truth takes us to the edge of anarchy, a world without truth in which history will be re-written by those who live to shape it.
Reviews:
Trustpilot
Very Good Good

To Kill the Truth Summary

To Kill the Truth by Sam Bourne

Someone is rewriting history . . . One death at a time.

Historians and Holocaust survivors dead in mysterious circumstances. Museums and libraries burning across the world. Digital records and irreplaceable proof, lost for ever.

Former White House operative Maggie Costello has sworn off politics. But when a newly-elected Governor seeks her help to stop the lethal spiral of killings, she knows that this is bigger than any political game. But who stands to gain most from the chaos?

A thriller for our times, To Kill the Truth takes the era of 'fake news' to its terrifying logical conclusion - with explosive results.

Customer Reviews - To Kill the Truth

To Kill the Truth Reviews

A Day of the Jackal for these dizzying times * Ian Rankin *
Urgently topical * The Times *
A gripping thriller and a prescient warning * Sunday Times *
A propulsive plot and an appealing heroine . . . The premise is both intriguing and, in the current climate of post-truth, fake news and sour populism, grimly topical * Guardian *
Read this book * Jeffrey Archer *
Chilling . . . You think today's news is nightmarish enough? Sam Bourne's provocative thriller imagines things getting much, much worse * Mail on Sunday *
A dazzling thriller * Charles Cumming, author of The Man Between *
Bourne's writing is chillingly plausible... Read it while it's still fiction * James Swallow, author of Nomad and Exile *
A perfect fit in an era of lurid revelations and wholly implausible plots that are nevertheless real * Sunday Times *
Totally compelling * Financial Times *
House of Cards mixed with Homeland * Eli Attie, Writer/Producer, The West Wing *
A barnstorming read * Raymond Khoury, author of The End Game *
Brilliantly convincing * David Hare *

In To Kill the Truth, Maggie Costello rivetingly tackles a cabal of Holocaust and slavery deniers, whose aim is nothing less than to destroy memory

* Sunday Times, Thriller of the Month *
Pacy, engaging and morally serious * Guardian *
Imaginative, intelligent and thought-provoking * The Times *
To Kill The Truth presents a frightening glimpse of where the current fake news agenda could lead * Daily Express *

Sam Bourne is the pseudonym of Jonathan Freedland, an award-winning journalist and broadcaster. He has written a weekly column for the Guardian since 1997, having previously served as the paper's Washington correspondent.

In the annual What the Papers Say Awards of 2002 Jonathan Freedland was named Columnist of the Year. His first novel, 'The Righteous Men,' was a Richard and Judy Summer Read and a Number 1 bestseller. His next two novels, 'The Last Testament' and 'The Final Reckoning' were both top ten bestsellers. He lives in London with his wife and their two children.

GOR010009627
To Kill the Truth by Sam Bourne
Sam Bourne
Used - Very Good
Paperback
Quercus Publishing
2019-08-22
464
1787474925
9781787474925
N/A
Book picture is for illustrative purposes only, actual binding, cover or edition may vary.
This is a used book - there is no escaping the fact it has been read by someone else and it will show signs of wear and previous use. Overall we expect it to be in very good condition, but if you are not entirely satisfied please get in touch with us.