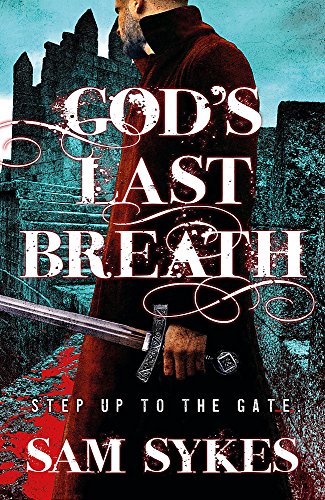 In Stock
£8.49
Acclaimed author Sam Sykes returns with the exhilarating conclusion to his Bring Down Heaven series.
Like New Very Good Good
Only 1 left

Acclaimed author Sam Sykes returns with the exhilarating conclusion to his Bring Down Heaven trilogy.

The great demon Khoth-Kapira has broken free of his prison and taken his first step upon the mortal world. And he owes it all to Lenk. Believing that the demon will heal a broken world that the gods have abandoned, Lenk serves as reluctant champion to Khoth-Kapira's cause. But as the desperate and fearful flock to Khoth-Kapira's banner, begging for salvation, Lenk begins to doubt his patron's great designs.

The city of Cier'Djaal, meanwhile, has become the field for the last great battle of mortals. And as humans, shicts and tulwar prepare to tear each other apart, none are aware of the ancient horror that marches upon their tiny wars.

At the tip of a spear or beneath the heel of demons, the reign of mortals ends.

It's a big story, grand on scale and packed with themes that range from the rich/poor divide to racial intolerance and simple greed. It's also a rollicking read, a ripping yarn spent in the company of desperate, damaged, yet ultimately sympathetic individuals. Sykes's love of his characters shines through in his writing. - Starburst MagazineWith playful language, distinctly drawn characters, and a cavalcade of action in service to a coherent plot, this book is a winner. I'll be reading the other books about Lenk and the gang while awaiting the next volume in the Bring Down Heaven trilogy. - SF SignalInsouciant, unrepentant and irrepressible adventurers in a powder keg of a city. And that's just how the story begins.Action fantasy with soul - albeit a small, dirty, funny soul.Sam Sykes continues to reinvent the fantasy adventuring party in a vibrant world of rude magic and good intentions gone bad. Bold and exuberant, never cynical, Sykes fights the good fight on behalf of rich fantasy that nonetheless refuses to apologise for being kick-ass fun.

Samuel Sykes began writing his debut novel, Tome of the Undergates (the first book in his Aeon's Gate trilogy) when he was seventeen. Since then, he has also written Black Halo, The Skybound Sea and the Bring Down Heaven trilogy that begins with The City Stained Red.

He currently lives in the US, where he is working on his next novel.

GOR009932127
God's Last Breath: Bring Down Heaven Book 3 by Sam Sykes
Sam Sykes
Bring Down Heaven
Used - Like New
Paperback
Orion Publishing Co
2018-09-06
672
0575132272
9780575132276
N/A
Book picture is for illustrative purposes only, actual binding, cover or edition may vary.
This is a used book - there is no escaping the fact it has been read by someone else and it will show signs of wear and previous use. Overall we expect it to be in very good condition, but if you are not entirely satisfied please get in touch with us.