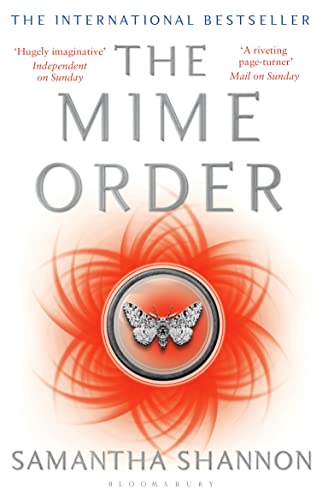 The Mime Order
by Samantha Shannon

The Mime Order by Samantha Shannon

A fugitive who will not be silenced It is a dark time for clairvoyants. Scion is in league with the Rephaim, an extraordinarily powerful, otherworldly race that intends to make humans its slaves. In an unprecedented feat of bravery, Paige Mahoney has succeeded in leading a mass break-out from the brutal camp, Sheol I, where she and other clairvoyants were systematically imprisoned. Paige is desperate to reach the safety of the London underworld, but the ruthless leader of the Rephaim, Nashira Sargas, is not likely to let her escape so easily... This new edition contains an exciting preview of the sequel, The Song Rising

Hugely imaginative * Independent on Sunday *
A trailblazer for young talent ... The way Shannon's characters shift, backstab and fall are as fascinating as the twists and turns of the plot * Independent *
Goes hell-for-leather, all poltergeists and grisly murders and pitched battles in the catacombs of Camden * Sunday Times *
Imagine The Hunger Games written by London's foremost psychogeographer, Iain Sinclair ... Some of the best fight scenes I've read in donkey's years ... Wherever she goes I will follow * Scotland on Sunday *
Shannon throws you into this rich, grimy near-future world * The Times *
Language as rich as a figgy pudding, the best terminology in the genre and gripping, edge-of-the-seat plotting to boot ... Penny dreadful stories clash with electronic tablets. Victorian-style street gangs use their fabulous supernatural powers to call on poltergeists for their skulduggery * Daily Mail *
Paige escapes a brutal prison camp to face darkness and danger as the fate of the underworld unfolds * Stylist *

Samantha Shannon is the New York Times and Sunday Times bestselling author of The Bone Season series. Her work has been translated into twenty-six languages. She lives in London. samanthashannon.co.uk / @say_shannon

GOR010920034
The Mime Order by Samantha Shannon
Samantha Shannon
The Bone Season
Used - Like New
Paperback
Bloomsbury Publishing PLC
2017-02-09
544
1408882515
9781408882511
N/A
Book picture is for illustrative purposes only, actual binding, cover or edition may vary.
The book has been read, but looks new. The book cover has no visible wear, and the dust jacket is included if applicable. No missing or damaged pages, no tears, possible very minimal creasing, no underlining or highlighting of text, and no writing in the margins.