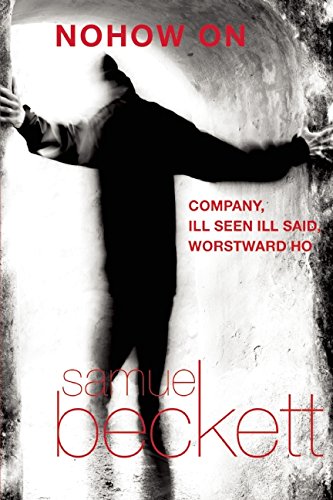 Nohow on
by Samuel Beckett

The three pieces that comprise this volume are among the most delicate and disquieting of Samuel Beckett's later prose. Each confined to a single consciousness in a closed space, these stories are a testament to the mind's boundless expanse. In Company, a man--"one on his back in the dark"--hears a voice speak to him, describing significant moments from his lifetime, and yet these memories may be merely fables and figments invented for the sake of companionship. Ill Seen Ill Said tells of a solitary old woman who paces around a cabin, burdened by existence itself. And Worstword Ho explores a world devoid of rationality and purpose, containing the famous directive: "Try again. Fail Again. Fail Better."

The quintessential distillation of Beckett's philosophy on human existence and the ultimate example of his minimalist approach to fiction, Nohow On is a vital collection, concerned with conception and perception, memory and imagination.

"Beckett has compressed his spare style to neutron star density. His words cluster together like crystal formations, cemented into patterns of rhythm and alliteration. . . . The most intense statement yet of its author's vision, this work focuses to a pinpoint one of the great sensibilities in modern world literature." --Washington Post

Samuel Beckett (1906-1989), one of the leading literary and dramatic figures of the twentieth century, was born in Foxrock, Ireland and attended Trinity College in Dublin. In 1969, Beckett was awarded the Nobel Prize in Literature and commended for having "transformed the destitution of man into his exaltation."

GOR010305107
Nohow on: Company, Ill Seen Ill Said, and Worstward Ho by Samuel Beckett
Samuel Beckett
Used - Very Good
Paperback
Grove Press / Atlantic Monthly Press
2011-02-03
144
0802144462
9780802144461
N/A
Book picture is for illustrative purposes only, actual binding, cover or edition may vary.
This is a used book - there is no escaping the fact it has been read by someone else and it will show signs of wear and previous use. Overall we expect it to be in very good condition, but if you are not entirely satisfied please get in touch with us.