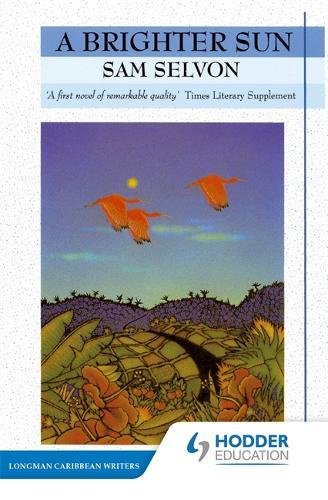 A Brighter Sun by Samuel Selvon

The Longman Caribbean Writers Series comprises of many classic novels, short stories and plays by the best known Caribbean authors, together with works of the highest quality from new writers.

A Brighter Sun by Samuel Selvon

Trinidad is in the turbulent throes of the Second World War. For Tiger, young and inexperienced, these are years in which to prove his manhood and independence. With his child-bride Urmilla, shy, bewildered and anxious, with two hundred dollars in cash and a milking cow, he sets out into the wilderness of adulthood.

This book is absolutely brilliant. It captures the true multi ethnic fabric of Trinidadian society through the trials of an Indian boy struggling to make it in early 20th century Trinidad. This book brings to light many ethnic and cultural issues that are a now inherent part of Trinidadian life, and is not only a brilliant piece of literature that should be cherished, but a piece of Caribbean history.

Samuel Selvon (the unusual Indian surname appears to be Tamil) was born on 20 May 1923, into a middle-class Presbyterian family in San Fernando, the southern city of Trinidad. His half-Scottish, half-Indian mother looked after the home, while his Madrasee father tended his dry-goods store in San Fernando. His mother, who spoke Hindi and English fluently, encouraged her children to be similarly bilingual, but Sam confesses that he eventually managed only a few swear words and common phrases. Young Sam attended two Canadian Mission primary schools. One in San Fernando, and the other nearby. He remembers fondly that at the latter, Grant C M School, he received warm encouragement in English Composition from a particular teacher. Sam moved on to Naparima College in San Fernando, another Canadian Mission institute, and during an undistinguished academic career, developed an abiding love for his two favourite subjects, English Language and English Literature. It was at Naparima College that he became a voracious reader.

In 1944, Selvon won a short story contest with a piece submitted to The Naval Bulletin, a publication of RNVR. He wrote both prose and poetry, often discarding what he wrote. One poem, however, was kept, and was later broadcast on the BBC radio programme 'Caribbean Voices' while Selvon was still in Trinidad. From RNVR, at the end of World War II, Selvon became a wireless operator with the Port of Spain Gazette, and shortly after, moved to the rival Trinidad Guardian. He spent three years with the newspaper, and left as sub-editor of special features.

Feeling that Trinidad was stifling his growing interest in creative writing, Selvon left for England in March, 1950, aboard the same ship as George Lamming, whom he had met before but did not know well. In London, Selvon, unable to secure a position in journalism, freelanced, publishing articles on various subjects. He later became a clerk in the Indian Government Civil Service Department in London. Needing a change, after twenty-eight years, Selvon left England in 1978 for Canada, where he resides. At present, he is writer-in-residence at the University of Calgary, teaching and working on a new novel, which seeks to explore the rich intricacies of the Trinidadian psyche.

GOR001582594
9780582642652
0582642655
A Brighter Sun by Samuel Selvon
Samuel Selvon
Used - Very Good
Paperback
Hodder Education
1979-05-29
240
N/A
Book picture is for illustrative purposes only, actual binding, cover or edition may vary.
This is a used book - there is no escaping the fact it has been read by someone else and it will show signs of wear and previous use. Overall we expect it to be in very good condition, but if you are not entirely satisfied please get in touch with us
Trustpilot