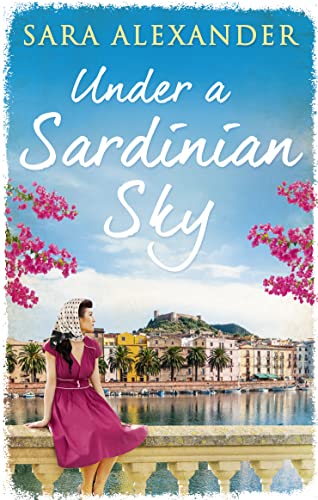 Under a Sardinian Sky
by Sara Alexander

In Stock
£2.39
Sometimes a family's deepest silences hide the most powerful secrets.
Very Good
9 in stock

Under a Sardinian Sky Summary

Under a Sardinian Sky by Sara Alexander

Sometimes a family's deepest silences hide the most powerful secrets.

For Mina, a London-based travel writer, the enigmatic silence surrounding her aunt Carmela has become a personal obsession.

Carmela disappeared from her Italian hometown long ago and is mentioned only in fragments and whispers. Mina has resisted prying, respectful of her family's Sardinian reserve. But now, with her mother battling cancer, it's time to learn the truth.

In 1952, Simius is a busy Sardinian town surrounded by fertile farms and orchards. Carmela Chirigoni, a farmer's daughter and talented seamstress, is engaged to Franco, son of the area's wealthiest family. Everyone agrees it's a good match. But Carmela's growing doubts about Franco's possessiveness are magnified when she meets Captain Joe Kavanagh.

Joe, an American officer stationed at a local army base, is charismatic, intelligent, and married. Hired as his interpreter, Carmela resolves to ignore her feelings, knowing that any future together must bring upheaval and heartache to both families.

As Mina follows the threads of Carmela's life to uncover her fate, she will discover a past still deeply alive in the present, revealing a story of hope, sacrifice, and extraordinary love.

Under a Sardinian Sky Reviews

`Readers will become immersed in Mina's journey into the past as she explores the nature and prejudices of her aunt's time, the complexities of familiar relationships, and the allure of love. Alexander's novel will leave readers riveted until the explosive conclusion.' - Publishers Weekly

Sara Alexander attended Hampstead School, London, and went on to graduate from the University of Bristol, with a BA hons in Theatre, Film & TV. She followed on to complete her postgraduate diploma in acting from Drama Studio London. She has worked extensively in the theatre, film and television industries, including roles in much loved productions such as Harry Potter & the Deathly Hallows, Doctor Who, and Franco Zeffirelli's Sparrow. She is based in the London.

GOR008244488
Under a Sardinian Sky by Sara Alexander
Sara Alexander
Used - Very Good
Paperback
HarperCollins Publishers
2017-04-20
400
0008217262
9780008217266
N/A
Book picture is for illustrative purposes only, actual binding, cover or edition may vary.
This is a used book - there is no escaping the fact it has been read by someone else and it will show signs of wear and previous use. Overall we expect it to be in very good condition, but if you are not entirely satisfied please get in touch with us.