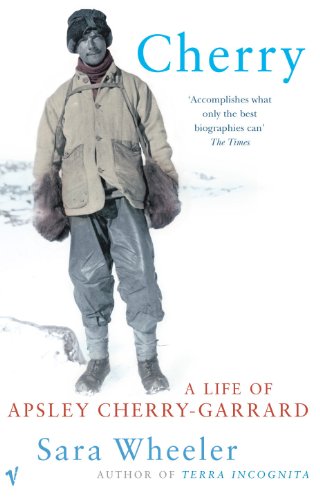 In Stock
£5.99
Cherry undertook an epic journey in the Antarctic winter to collect the eggs of the Emperor penguin. 'But we kept our tempers,' Cherry wrote, 'even with God.'After serving in the First War Cherry was invalided home, and with the zealous encouragement of his neighbour Bernard Shaw he wrote a masterpiece.
Very Good Good
9 in stock

Cherry: A Life of Apsley Cherry-Garrard by Sara Wheeler

Apsley Cherry-Garrard (1886-1959) was one of the youngest members of Captain Scott's final expedition to the Antarctic. Cherry undertook an epic journey in the Antarctic winter to collect the eggs of the Emperor penguin. The temperature fell to seventy below, it was dark all the time, his teeth shattered in the cold and the tent blew away. 'But we kept our tempers,' Cherry wrote, 'even with God.' After serving in the First War Cherry was invalided home, and with the zealous encouragement of his neighbour Bernard Shaw he wrote a masterpiece. In The Worst Journey in the World Cherry transformed tragedy and grief into something fine. But as the years unravelled he faced a terrible struggle against depression, breakdown and despair, haunted by the possibility that he could have saved Scott and his companions. This is the first biography of Cherry. Sara Wheeler, who has travelled extensively in the Antarctic, has had unrestricted access to new material and the full co-operation of Cherry's family.

"Accomplishes what only the best biographies can" * The Times *
"Beautiful...written with unfailing eloquence and grace, and great admiration for its subject" * Independent *
"Brilliantly succeeds not only in brining this modest man disarmingly to life but also in recreating the England of his time and social setting...a formidable accomplishments" * Sunday Telegraph *
"Beautifully written... Wheeler's vocabulary to evoke this luminous and cruel continent appears limitless" * New York Times *
"With this wonderful biography Sara Wheeler has now vaulted into the front rank of modern British writers...this volume is so much more than a story of one remarkable man. It is among other things an exploration of the mind, a tour through the notions of national identity and pride, and a celebration of the tensile strength of the human spirit" -- Simon Winchester

Sara Wheeler's books include the international bestseller Terra Incognita: Travels in Antarctica, of which the Telegraph reviewer wrote, `I do not think there will ever be a better book on the Antarctic.' The Magnetic North: Notes from the Arctic Circle, was chosen as Book of the Year by Will Self, Michael Palin, A. N. Wilson and others. She has published two biographies of travellers: Cherry: A Life of Apsley Cherry-Garrard, and Too Close to the Sun: The Life and Times of Denys Finch Hatton, and was immensely relieved to write about women at last in O My America!. She lives in London.

GOR001209001
Cherry: A Life of Apsley Cherry-Garrard by Sara Wheeler
Sara Wheeler
Used - Very Good
Paperback
Vintage Publishing
2002-08-31
384
0099437538
9780099437536
N/A
Book picture is for illustrative purposes only, actual binding, cover or edition may vary.
This is a used book - there is no escaping the fact it has been read by someone else and it will show signs of wear and previous use. Overall we expect it to be in very good condition, but if you are not entirely satisfied please get in touch with us.