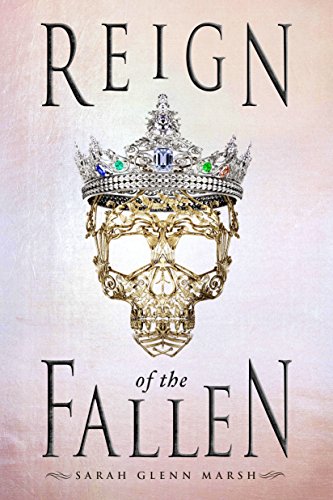 Reign Of The Fallen
by Sarah Glenn Marsh

Reign Of The Fallen Summary

Reign Of The Fallen by Sarah Glenn Marsh

Odessa is one of Karthia's master necromancers, catering to the kingdom's ruling Dead. Whenever a noble dies, it's Odessa's job to raise them by retrieving their souls from a dreamy and dangerous shadow world called the Deadlands. But there is a cost to being raised--the Dead must remain shrouded, or risk transforming into zombie-like monsters known as Shades. If even a hint of flesh is exposed, the grotesque transformation will begin.

A dramatic uptick in Shade attacks raises suspicions and fears among Odessa's necromancer community. Soon a crushing loss of one of their own reveals a disturbing conspiracy- someone is intentionally creating Shades by tearing shrouds from the Dead--and training them to attack. Odessa is faced with a terrifying question- What if her necromancer's magic is the weapon that brings Karthia to its knees?

A lavish fantasy with a surprising and breathtaking LGBT romance at its core, Reign of the Fallen is a gutsy, unpredictable read that will grab readers by the throat and never let go . . .

Sarah Glenn Marsh has been an avid fantasy reader from the day her dad handed her a copy of The Hobbit and promised it would change her life; she's been making up words and worlds ever since. When she's not writing, Sarah enjoys painting, ghost hunting, traveling, and all things nerdy. She lives in Richmond, Virginia, with her husband and their menagerie- four rescued greyhounds, a bird, and many fish. She is the author of Fear the Drowning Deep and Reign of the Fallen.

GOR010300709
Reign Of The Fallen by Sarah Glenn Marsh
Sarah Glenn Marsh
Used - Very Good
Paperback
Razorbill
2018-07-02
0451479815
9780451479815
N/A
Book picture is for illustrative purposes only, actual binding, cover or edition may vary.
This is a used book - there is no escaping the fact it has been read by someone else and it will show signs of wear and previous use. Overall we expect it to be in very good condition, but if you are not entirely satisfied please get in touch with us.