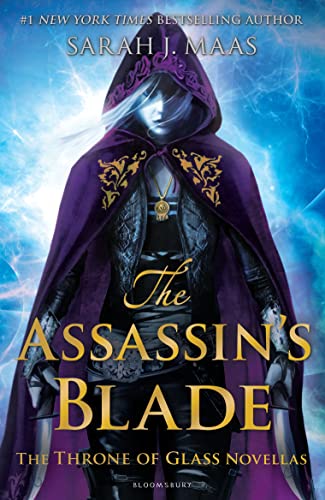 The Assassin's Blade: The Throne of Glass Novellas by Sarah J. Maas

Find out where the Throne of Glass journey began in this irresistible bind-up of all five of #1 New York Times bestselling author Sarah J. Maas's Assassin novellas Celaena Sardothien is Adarlan's most feared assassin. As part of the Assassins' Guild, her allegiance is to her master, Arobynn Hamel, yet Celaena listens to no one and trusts only her fellow killer-for-hire, Sam. In these action-packed prequel novellas - together in one edition for the first time - Celaena embarks on five daring missions. They take her from remote islands to hostile deserts, where she fights to liberate slaves and seeks to avenge the tyrannous. But she is acting against Arobynn's orders and could suffer an unimaginable punishment for such treachery . . . Explore the dark underworld of this kick-ass heroine and find out how the legend begins in the five page-turning prequel novellas to the New York Times bestselling Throne of Glass series.

Sarah J. Maas is the #1 New York Times and internationally bestselling author of the THRONE OF GLASS, A COURT OF THORNS AND ROSES and CRESCENT CITY series. A New York native, Sarah lives near Philadelphia with her husband, son and dog. sarahjmaas.com facebook.com/theworldofsarahjmaas Instagram: therealsjmaas

GOR005717499
The Assassin's Blade: The Throne of Glass Novellas by Sarah J. Maas
Sarah J. Maas
Throne of Glass
Used - Very Good
Paperback
Bloomsbury Publishing PLC
2014-03-13
448
1408851989
9781408851982
N/A
Book picture is for illustrative purposes only, actual binding, cover or edition may vary.
This is a used book - there is no escaping the fact it has been read by someone else and it will show signs of wear and previous use. Overall we expect it to be in very good condition, but if you are not entirely satisfied please get in touch with us.