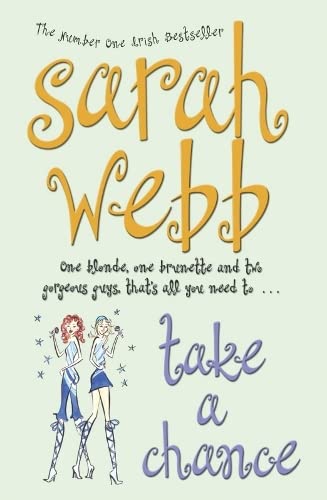 Take a Chance
by Sarah Webb

Take a Chance by Sarah Webb

'Abbafab', the hugely popular Abba tribute band, are in trouble. Gemma Redden has just broken her ankle and finding a new singer to fill her white platform boots at such late notice isn't going to be easy. But desperate times call for desperate measures, and the youngest Redden sister, Mia, reluctantly agrees to don the blonde wig and sky-blue hot pants. For Mia, a shy piano teacher who has felt third best all her life, this is her big chance to prove herself to her two older sisters, Gemma and Wendy.

Meanwhile, Mia's oldest friend, Alva Ryan, is having a life crisis of her own, Her builder boyfriend and all-round-good-guy, Sean Malone, has just walked out and this time he swears he's not coming back. And Alva's sister, Kerry, is having rather unusual problems of her own.

Things come to a head when Wendy has a terrible accident. Because Wendy is harbouring a secret that could blow the band apart and devastate the close bond of the Redden sisters. But secrets have a way of coming out when you least expect them to.

And sometimes even the best of sisters gets it horribly wrong.

Sarah Webb was a children's bookseller for 12 years and now writes full-time. She lives in Dublin with her partner and two young children. She also reviews children's books for many Irish newspapers and magazines, and has written her own, including the popular Kids Can Cook series. She appears regularly on Irish television's 'The Den'. Her previous books include Always the Bridesmaid and Something to Talk About, both of which were No 1 bestsellers in Ireland. Take a Chance is her sixth novel.

GOR001199541
Take a Chance by Sarah Webb
Sarah Webb
Used - Very Good
Paperback
Pan Macmillan
2006-03-03
320
0330435736
9780330435734
N/A
Book picture is for illustrative purposes only, actual binding, cover or edition may vary.
This is a used book - there is no escaping the fact it has been read by someone else and it will show signs of wear and previous use. Overall we expect it to be in very good condition, but if you are not entirely satisfied please get in touch with us.