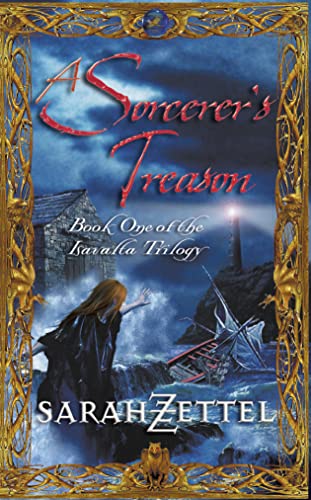 A Sorcerer's Treason
by Sarah Zettel

Volume one of the stunning fantasy trilogy set partly on the shores of Lake Superior in the 19th century.

A Sorcerer's Treason: Book One of the Isavalta Trilogy by Sarah Zettel

Volume one of the stunning fantasy trilogy set partly on the shores of Lake Superior in the 19th century.

Bridget Lederle is the lighthouse keeper of Sand Island Lighthouse, a woman ostracised by the locals because of the bastard child she bore to a visiting Finnish fisherman, and because of her own mysterious antecedents. It is rumoured she's a witch; certainly, she has strange and uncontrollable visions and premonitions. One day, she has a premonition of disaster and `sees' a small boat being dashed to pieces on the rocks off the island in a storm; the next day the storm kicks up - and she goes out to find a man thrown up on the shore, almost dead. When he speaks, it is in an unknown language; he has bizarre tattoos, and when he wraps a piece of braided cloth about her arm, she is suddenly able to understand him.

He tells her he is from another world, a world in which she is a great magical force, and that her presence is required to save the Dowager Empress, currently under threat from her poisonous daughter-in-law. It is an attractive offer for a woman with nothing to lose (her baby died, she has no prospects in our world); she goes with the wizard to Isavalta. But there she will find nothing is quite as he promised her...

`A fresh and surprisingly exciting fantasy thriller...Zettel's engaging writing style conjures up a gripping plot and some effective, three-dimensional characterisation. Even the magic system is well-thought out and inventive...this engaging and vivid slice of escapist fantasy will keep fans of Robin Hobb more than happy' SFX

`Zettel's first fantasy novel is a triumph of story-telling...All the characters are powerfully drawn, especially Bridget, a strong and attractive heroine...A Sorcerer's Treason is a magnificent fantasy novel, showcasing just how good this genre can be. Rich, compelling and exciting, this could be the best fantasy debut in years' Amazon

Sarah Zettel was born in California in 1966. Since then, she's lived in ten cities, four states and two countries. She has written four science fiction novels and many short stories in the sf, fantasy and horror genres. She currently lives in Michigan with her husband and their son.

GOR001221069
A Sorcerer's Treason: Book One of the Isavalta Trilogy by Sarah Zettel
Sarah Zettel
Used - Very Good
Paperback
HarperCollins Publishers
2002-10-23
608
0007114001
9780007114009
N/A
Book picture is for illustrative purposes only, actual binding, cover or edition may vary.
This is a used book - there is no escaping the fact it has been read by someone else and it will show signs of wear and previous use. Overall we expect it to be in very good condition, but if you are not entirely satisfied please get in touch with us.