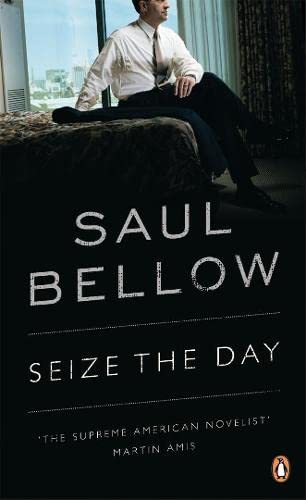 Seize the Day
by Saul Bellow

In Stock
£14.99
Tommy Wilhelm has failed to make it big as an actor, left his family and lost his job. His successful father lectures him about changing his life. But he clings to the hope that his luck is about to turn and has given his last $700 to Dr Tamkin to invest. Is Tamkin ripping him off? Or does he offer him a chance to make it out of this mess?
Very Good
Only 3 left

Seize the Day by Saul Bellow

Tommy Wilhelm is a worried man.

Once charming, he has failed to make it big as an actor in Hollywood, left his family and lost his job as a salesman. Now he lives in the Hotel Gloriana in New York City, while his successful father lectures him about changing his life. But Wilhelm clings to the hope that his luck is about to turn - and has given his last $700 to the mysterious, philosophizing Dr Tamkin to invest.

Is the smooth-talking Tamkin ripping Wilhelm off? Or does he offer him one last chance to make it out of this mess?

Saul Bellow was born in 1915 to Russian emigre parents. As a young child in Chicago, Bellow was raised on books - the Old Testament, Shakespeare, Tolstoy and Chekhov - and learned Hebrew and Yiddish. He set his heart on becoming a writer after reading Uncle Tom's Cabin, contrary to his mother's hopes that he would become a rabbi or a concert violinist. He was educated at the University of Chicago and North-Western University, graduating in Anthropology and Sociology; he then went on to work for the Encyclopaedia Britannica. Bellow published his first novel, The Dangling Man, in 1944; this was followed, in 1947, by The Victim. In 1948 a Guggenheim Fellowship enabled Bellow to travel to Paris, where he wrote The Adventures of Augie March, published in 1953. Henderson The Rain King (1959) brought Bellow worldwide fame, and in 1964, his best-known novel, Herzog, was published and immediately lauded as a masterpiece, 'a well-nigh faultless novel' (New Yorker). Saul Bellow's dazzling career as a novelist was celebrated during his lifetime with an unprecedented array of literary prizes and awards, including the Pulitzer Prize, three National Book Awards, and the Gold Medal for the Novel. In 1976 he was awarded a Nobel Prize 'for the human understanding and subtle analysis of contemporary culture that are combined in his work'. Bellow's death in 2005 was met with tribute from writers and critics around the world, including James Wood, who praised 'the beauty of this writing, its music, its high lyricism, its firm but luxurious pleasure in language itself'.

GOR001064859
Seize the Day by Saul Bellow
Saul Bellow
Used - Very Good
Paperback
Penguin Books Ltd
2006-01-26
144
0141023406
9780141023403
N/A
Book picture is for illustrative purposes only, actual binding, cover or edition may vary.
This is a used book - there is no escaping the fact it has been read by someone else and it will show signs of wear and previous use. Overall we expect it to be in very good condition, but if you are not entirely satisfied please get in touch with us.