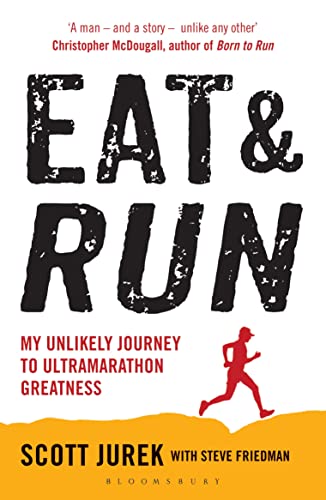 Eat and Run
by Scott Jurek

Eat and Run: My Unlikely Journey to Ultramarathon Greatness by Scott Jurek

'Run until you can't run anymore. Then run some more. Find a new source of energy and will. Then run even faster.' The words of Scott Jurek, a dominant force - and darling - in the gruelling and growing sport of ultrarunning for more than a decade. In 1999, as a complete unknown, he took the lead in the Western States Endurance Run, a 100-mile jaunt over the Gold Rush trails of America's Sierra Nevada. He went on to win that race seven years in a row. Jurek was also one of the elite runners who travelled to Mexico to run with the Tarahumara Indians, as profiled in the international bestseller Born to Run. His accomplishments are nothing short of extraordinary. In Eat and Run, Jurek opens up about his life and career as an elite athlete, and about the vegan diet that is key to his success. From his Midwestern childhood of hunting and fishing to his slow transition to ultrarunning and veganism, to his epic, record-breaking races, Jurek's story shows the power of an iron will and the importance of thinking of food as fuel. Full of stories of endurance and competition as well as practical advice and some of his original recipes, Eat and Run will motivate people to go the distance, whether that means getting out for a first run, expanding your food horizons, or simply exploring the limits of human potential.

A triumph ... a breathtakingly personal account ... A man - and a story - unlike any other * Christopher McDougall, bestselling author of Born to Run *
Pulverising the outer limits of human endurance, the ultramarathon legend discusses his training secrets and the value of thinking of food as fuel * Men's Health *
a brilliant book * Women's Running *

Scott Jurek is a world-renowned ultramarathon champion who trains and races on a plant-based diet. One of the key characters in the bestselling Born to Run, he is known and admired for his earth-conscious lifestyle and is also a highly sought-after motivational speaker, physical therapist, coach, and chef. Steve Friedman has been published in the New York Times, Esquire, and The Best American Sports Writing. He is the author of Lost on Treasure Island and Driving Lessons.

GOR005207597
Eat and Run: My Unlikely Journey to Ultramarathon Greatness by Scott Jurek
Scott Jurek
Used - Very Good
Paperback
Bloomsbury Publishing PLC
2013-04-11
272
1408833409
9781408833407
N/A
Book picture is for illustrative purposes only, actual binding, cover or edition may vary.
This is a used book - there is no escaping the fact it has been read by someone else and it will show signs of wear and previous use. Overall we expect it to be in very good condition, but if you are not entirely satisfied please get in touch with us.