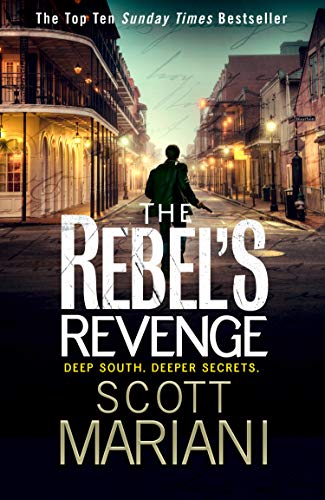 The Rebel's Revenge
by Scott Mariani

Even when ex-SAS major Ben Hope is taking a holiday, trouble seems to find him. What started as a relaxing trip to the Deep South spirals into a nightmare when he's wrongly accused of a vicious murder and forced to go on the run.

Target of a state-wide manhunt, the only way Ben can prove his innocence is to unearth a long-forgotten secret and track down the killers who slaughtered an innocent woman in a vendetta dating back generations. His quest takes him into the wild heart of Louisiana's swampland, where all hell's about to break loose. The bad guys will soon discover they made a big mistake...

The Ben Hope series is a must-read for fans of Dan Brown, Lee Child and Mark Dawson. Join the millions of readers who get breathless with anticipation when the countdown to a new Ben Hope thriller begins...

Whilst the Ben Hope thrillers can be read in any order, this is the eighteenth book in the series.

`A romp of a read, each page like a tasty treat. Enjoy.' STEVE BERRY

Scott Mariani is the author of the worldwide-acclaimed action / adventure series featuring maverick ex-SAS hero Ben Hope. Scott's books have topped the bestseller charts in his native Britain, with The Alchemist's Secret, the first Ben Hope novel, having held the #1 Kindle position for a record-breaking six straight weeks. The Ben Hope series is translated into over twenty languages worldwide.

Scott was born in Scotland, studied in Oxford and now lives and writes in rural west Wales.

GOR009945151
The Rebel's Revenge (Ben Hope, Book 18) by Scott Mariani
Scott Mariani
Ben Hope
Used - Like New
Paperback
HarperCollins Publishers
2018-11-15
432
0008235929
9780008235925
N/A
Book picture is for illustrative purposes only, actual binding, cover or edition may vary.
The book has been read, but looks new. The book cover has no visible wear, and the dust jacket is included if applicable. No missing or damaged pages, no tears, possible very minimal creasing, no underlining or highlighting of text, and no writing in the margins.