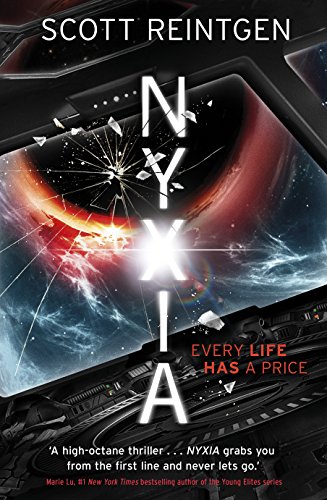 Emmett Atwater isn't just leaving Detroit; he's leaving Earth. Why Babel recruited him is a mystery, but the number of zeroes on his contract has him boarding their lightship and hoping to return to Earth with enough money to take care of his family, forever. As he and nine other teenagers wormhole their way through space, Emmett discovers that each recruit must earn the right to travel down to Eden. There, Babel will use them to mine a substance that's quietly become the most valuable one in the world. For the chosen 10, every training session is measured, every point matters, and Emmett will do anything to win. But Babel's ship is full of secrets. And as Emmett uncovers the truth, he realizes he's not fighting for wealth or glory. He's fighting for his life.

Fans of Hunger Games and Red Rising will devour this - it's ridiculously good. I loved every page -- K.D., Goodreads
In a word: Wow. I could not put it down. If I could give it six stars, I would -- Nic Stone, Goodreads
An absolute page-turner -- Vic James, author of 'Gilded Cage'
My most anticipated YA debut of 2017 -- Pied Piper, Goodreads
Fast-moving and thrilling, and very difficult to put down -- Justin, Goodreads
The setup will draw comparisons to The Hunger Games, but Reintgen's characters stand on their own, and the trials they face are inventive. Emmett's self-deprecation, wit, and ability to see the good in others will keep readers riveted and eager for the next volume in this planned trilogy * Publishers Weekly *
A black protagonist in outer space is welcome...copious action and a reality TV atmosphere (the scoreboard shows regularly) make the pace flow. Fast-moving and intriguing * Kirkus Reviews *
An amazing adventure of intelligence and strength, this sci-fi book presents diverse and complex characters in a tale about greed and internal compromise. The author brings to life more than a dozen characters with depth and individual personalities and agendas. This is a wonderful example of how personal and corporate values are often intertwined despite being at odds with each other. Verdict: Fans of The Hunger Games and The Maze Runner series will enjoy this series opener * School Library Journal *
File this book under A for Amazing -- Jay Kristoff * New York Times bestselling author of The Illuminae Files *
Brilliant concept meets stellar execution in this fast-paced deep space adventure. I was hooked from page one * Victoria Schwab, #1 New York Times bestselling author *
Reintgen's Nyxia has all the qualities that will make this become a blockbuster and one of the most important young-adult science-fiction stories of our time. The plot is gripping. The characters are a spectacularly multi-ethnic blend of misfits and outsiders that are unflinchingly human and flawed. Simply amazing all around, and I desperately need the next story from this new author -- Jay Coles * author of Tyler Johnson Was Here *
Sleek, fast, and action-packed, this is a thrilling new take on space adventure. I got to the end and instantly wanted more -- Stefan Bachmann * author of the internationally acclaimed The Peculiar *
Sleek, fast, and action-packed, this is a thrilling new take on space adventure. I got to the end and instantly wanted more -- Nic Stone * debut author of Dear Martin *
With a vivid cast of characters, relentless pacing, and layers ofmystery, Reintgen hits all the right buttons to craft an addictive pageturner -- Fonda Lee * author of Zeroboxer and Exo *
The futuristic ship is full of impressive gadgets; the competitions are clever and it's fun to guess what skill they might be designed to elicit; the true stars, however, are the teens themselves, wildly diverse and all carrying their own emotional baggage. It is still of note when an African American boy pops up as a sci-fi protagonist, and Emmett is a complex, well-developed, and rich character who speaks, acts, and interacts like a teen who was raised in a rough, urban setting but surrounded by people who love him. Both curious and suspicious at every turn, he is an ideal narrator, and a sequel can't come soon enough * The Bulletin of the Center of Children's Books *

Scott Reintgen has spent his career teaching English and Creative Writing in diverse urban communities in the United States. The hardest lesson he learned was that inspiration isn't equally accessible for everyone. So he set out to write a novel for the front-row sleepers and back-row dreamers of his classrooms. He hopes that his former students see themselves, vibrant and on the page, in characters like Emmett. Nyxia and Nyxia Unleashed are the first two novels in The Nyxia Triad. You can follow Scott on Facebook, on Instagram and on Twitter at @Scott_Thought.

GOR008595269
Nyxia: The Nyxia Triad by Scott Reintgen
Scott Reintgen
The Nyxia Triad
Used - Very Good
Hardback
Penguin Books Ltd
2017-09-15
384
0718188829
9780718188825
N/A
Book picture is for illustrative purposes only, actual binding, cover or edition may vary.
This is a used book - there is no escaping the fact it has been read by someone else and it will show signs of wear and previous use. Overall we expect it to be in very good condition, but if you are not entirely satisfied please get in touch with us.