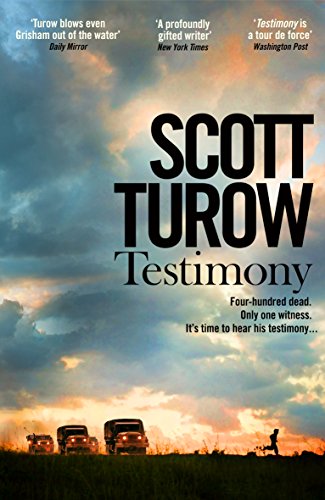 Used Price
£4.49
New RRP £8.99
Free Shipping in the UK
Four hundred dead. Only one witness. Scott Turow is back tackling his biggest case yet in The Hague . . .
Reviews:
Trustpilot
Very Good Good

From the bestselling author of Presumed Innocent comes Testimony, Scott Turow's most twist-filled thriller to date.

Bill ten Boom has walked out on everything he thought was important to him: his career, his wife, even his country. Invited to become a prosecutor at The Hague's International Criminal Court, it was a chance to start afresh.

But when his first case is to examine the disappearance of four hundred Roma refugees - an apparent war crime left unsolved for ten years - it's clear this new life won't be an easy one . . .

Whispered rumours have the perpetrators ranging from Serb paramilitaries to the U.S. Army, but there's no hard evidence to hold either accountable, and only a single witness to say it happened at all.

To get to the truth, Boom must question the integrity of every person linked to the case - from Layton Merriwell, a disgraced US Major General, to flirtatious barrister, Esma Czarni - as it soon becomes apparent that every party has a vested interest and no qualms in steering the investigation their way . . .

A smart, demanding new thriller . . . Testimony is a tour de force * Washington Post *
Turow successfully recreates the roiling uncertainty of the Bosnian conflict and its consequences, the stew of racism, military aggression and crime, the willingness of ordinary people to visit spectacular cruelty on their neighbors in obedience to ethnic enmities centuries old. Testimony is admirable and important. * New York Times *
Turow's lively prose and terrific cast of supporting characters make Testimony one for the beach bag. This is a guy who knows what he's doing * USA Today *
If there were a Mount Rushmore for the modern legal thriller, Scott Turow would be one of the novelists immortalized in granite * Fort Worth Star Telegram *
A master of the legal thriller, Scott Turow has returned with his most irresistibly confounding and satisfying novel yet * Book Reporter *
An engrossing new page-turner . . . Turow has created a compelling, all-consuming drama that maintains the themes that thread through his fiction: the contradictions and conflicts of characters with secrets, often from themselves, and how idealism can be shaken when law, politics, and capitalism mix to distort fairness and justice. * National Book Review *
Turow applies the same storytelling magic to the ICC that has drawn scores of readers into his Kindle County courtrooms, weaving fascinating details about the challenges of prosecuting war crimes into a suspenseful story of redemption and the complexities of justice. * Booklist *
A complex and haunting tale of war crimes that will not only satisfy his courtroom drama devotees but also readers of international thrillers * Library Journal *
Bestseller Turow movingly evokes the horrors of the Balkan wars in this gripping thriller * Publishers Weekly *
Turow has not lost his gift for marshalling huge amounts of information and orchestrating its careful release to the reader. The eventual solution of the massacre mystery is satisfying and politically topical * Guardian *
A page-turning legal thriller with a weighty examination of recent world history * Financial Times *

Scott Turow is a writer and attorney. He is the author of numerous bestselling works of fiction, including his first novel, Presumed Innocent and it's sequel, Innocent. Mr Turow has been a partner in the Chicago office of Sonnenschein Nath and Rosenthal, a national law firm, since 1986, concentrating on criminal defence. He was elected the President of the Authors Guild in 2010.

GOR009027852
Testimony by Scott Turow
Scott Turow
Kindle County
Used - Very Good
Paperback
Pan Macmillan
2018-04-05
496
1509843345
9781509843343
N/A
Book picture is for illustrative purposes only, actual binding, cover or edition may vary.
This is a used book - there is no escaping the fact it has been read by someone else and it will show signs of wear and previous use. Overall we expect it to be in very good condition, but if you are not entirely satisfied please get in touch with us.