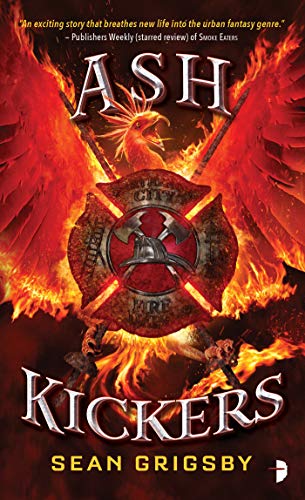 In Stock
£14.99
Dragons vs Firefighters vs the Phoenix. The scorching fantasy sequel to Smoke Eaters.
Very Good
Only 2 left

With ex-firefighter Cole Brannigan in command of the Smoke Eaters, the dragon menace is under control. Thanks to non-lethal Canadian tech, the beasts are tranquilized and locked up, rather than killed. But for Tamerica Williams, this job filled with action and danger, has become tediously routine. When a new threat emerges, a legendary bird of fire - the Phoenix - it's the perfect task for Williams. But killing the Phoenix just brings it back stronger, spreading fire like a plague and whipping dragons into a frenzy. Will it prove to be too much excitement, even for adrenalin-junkie Williams? File Under: Fantasy [ Smoke Em | Catchand Release | Fire Bird | Arson About ]

"An ingenious premise that Grigsby delivers on with intelligence and style. Smoke Eaters is a treat!"
"Smoke Eaters is a thrilling, exciting, funny and strangely heart-warming book, and Grigsby's experience as a firefighter shines through on every page. It's exactly as bonkers - and as brilliant - as you'd expect and I look forward to more from this author."
"I've been waiting for a book like this for years. Original, exciting, Smoke Eaters is a red-hot page-turner."
"firefighter Grigsby knows just how to pull readers into scenes full of smoke and flame. Readers will delight in this fresh take on action fantasy."
"a narrative that reads like a passionate homage to the action blockbusters we all grew up watching."
"This book is instinctively and perceptively created and a joy to read."
"The fires burn hotter and the action is more furious on our second visit to this unusual urban fantasy universe."

SEAN GRIGSBY is a professional firefighter in central Arkansas, where he writes about lasers, aliens, and guitar battles with the Devil when he's not fighting dragons. He grew up on Goosebumps books in Memphis, Tennessee, and hosts the Cosmic Dragon podcast.

GOR009936490
Ash Kickers: Smoke Eaters II by Sean Grisgby
Sean Grisgby
Smoke Eaters
Used - Very Good
Paperback
Unknown
0
0857667971
9780857667977
N/A
Book picture is for illustrative purposes only, actual binding, cover or edition may vary.
This is a used book - there is no escaping the fact it has been read by someone else and it will show signs of wear and previous use. Overall we expect it to be in very good condition, but if you are not entirely satisfied please get in touch with us.