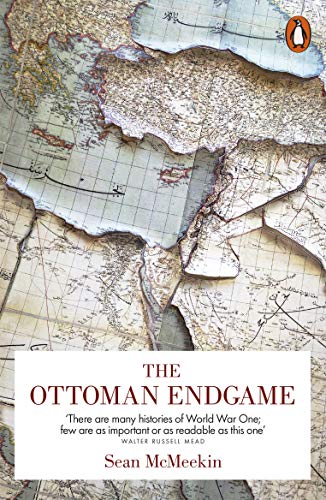 The Ottoman Endgame
by Sean McMeekin

In Stock
£8.49
A single-volume history of the Ottoman empire's decade-long war for survival. Beginning with Italy's invasion of Ottoman Tripoli in September 1911, the opening salvo in what would soon spiral into a European conflict, it concludes with the establishment of Turkish independence in the Treaty of Lausanne, 1923.
Very Good
Only 1 left

The Ottoman Endgame: War, Revolution and the Making of the Modern Middle East, 1908-1923 by Sean McMeekin

'An outstanding history ... one of the best writers on the First World War' Simon Sebag Montefiore

Shortlisted for the Duke of Westminster Medal for Military Literature

The Ottoman Endgame is the first, and definitive, single-volume history of the Ottoman empire's agonising war for survival. Beginning with Italy's invasion of Ottoman Tripoli in September 1911, the Empire was in a permanent state of emergency, with hardly a frontier not under direct threat. Assailed by enemies on all sides, the Empire-which had for generations been assumed to be a rotten shell-proved to be strikingly resilient, beating off major attacks at Gallipoli and in Mesopotamia before finally being brought down in the general ruin of the Central Powers in 1918.

As the Europeans planned to partition all its lands between them and with even Istanbul seemingly helpless in the face of the triumphant Entente, an absolutely unexpected entity emerged: modern Turkey. Under the startling genius of Mustafa Kemal Ataturk, a powerful new state emerged from the Empire's fragments.

This is the first time an author has woven the entire epic together from start to finish - and it will cause many readers to fundamentally re-evaluate their understanding of the conflict. The consequences, well into the 21st century, could not have been more momentous - with countries as various as Serbia, Greece, Libya, Armenia, Iraq and Syria still living with them.

There are many histories of World War One; few are as important or as readable as this one -- Walter Russell Mead
It is an enormous story, and McMeekin is a worthy chronicler of it ... The Ottoman Endgame is the most satisfactory and thought-through of the recent books on the subject that I have seen -- Norman Stone
A wry, delightful book, which fills in a neglected face of the war and traces the emergence of the modern Middle East -- Geoffrey Wawro
A tour de force -- Philip Mansel
Masterful and sympathetic ... superb -- Charles King * Literary Review *
Original and passionately written * Economist *
A marvellous exposition of the historian's art -- Christopher de Bellaigue * Guardian *
This readable, much-praised and opinionated work chronicles the Ottomans' entry into the war on Germany's side, its eventual defeat and its final dismemberment -- Gerard Russell * The Times *
A well-timed, well-researched exploration of the empire whose dissolution continues to complicate making sense of the contemporary Middle East. Herein are explanations of how modern Turkey, Iraq, and Syria came to be, as well as how the division of the rest of the region affected its future. Scholars and practitioners alike will benefit from reading it -- Henry Kissinger

Sean McMeekin is Professor of History at Bard College, New York. For some years he taught at Bilkent University, Istanbul. His books include the highly successful The Berlin-Baghdad Express (Penguin), The Russian Origins of the First World War and The Ottoman Endgame (Penguin).

GOR007937469
The Ottoman Endgame: War, Revolution and the Making of the Modern Middle East, 1908-1923 by Sean McMeekin
Sean McMeekin
Used - Very Good
Paperback
Penguin Books Ltd
2016-06-30
576
0718199715
9780718199715
N/A
Book picture is for illustrative purposes only, actual binding, cover or edition may vary.
This is a used book - there is no escaping the fact it has been read by someone else and it will show signs of wear and previous use. Overall we expect it to be in very good condition, but if you are not entirely satisfied please get in touch with us.