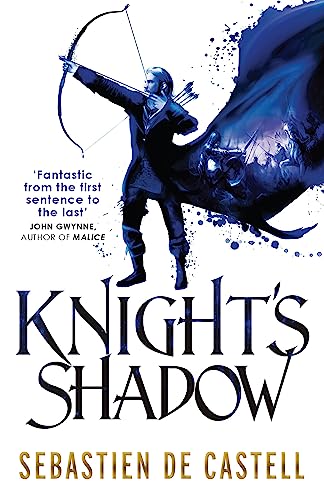 New Price
£10.99
Free Shipping in the UK
The Three Musketeers meets Joe Abercrombie via Mark Lawrence. The Greatcoats have found the heir to the throne . . . but now they must keep her alive, against all the odds.
Reviews:
Trustpilot
New£10.99

'One hell of a good book' Conn Iggulden

The Greatcoats have found the heir to the throne . . . but now they must keep her alive, against all the odds.

Falcio Val Mond has completed the final task given to him by the late King Paelis: he has found the King's Charoites (well, one at least). But his task isn't over, and now he, Kest and Brasti must protect the girl from those her want her dead.

That would be simple enough, if it weren't for the renegade Knights and legendary Dashini assassins, getting in their way, not to mention the Dukes, who are desperate to hold on to their power at any cost, or Trin, the merciless daughter of the ruthless Duke of Rijou and the cruel Duchess of Hervor, who is determined to be Queen of Tristia. Of course, the fact that the heir to the throne is thirteen years old doesn't help, nor the fact that every day brings Falcio closer to dying from the poison running through his veins.

And then there is the Greatcoats Lament . . .

An energetic, fun adventure that puts the "musk" back in "musketeer." Guaranteed to increase household swashbuckling by 100%. * Library Journal *
Don't hesitate to buy this if you love a great hero and story . . . What a voice! What story-telling brio! If you love Dumas, or Game of Thrones or The False Prince this is the swashbuckling fantasy for you. * Amanda Craig, author of Hearts And Minds *
One hell of a good book * Conn Iggulden *
Fantastic from the first sentence to the last. Combining old-school swashbuckling action with contemporary characters and a good dose of grit, these books are the rarest of things, great rollicking fun combined with an emotional punch . . . Sebastien, write faster! * John Gwynne, Author of the Faithful and the Fallen *
High energy, highly unique, swashbuckling-cop-epic-noir story. Buy it. BUY IT NOW. * Sam Sykes, author of The City Stained Red *
Knight's Shadow is an excellent and engaging story, one of the best books I've read in a long time. 10/10 * Fantasy-Faction *
Excels at telling a fun, exciting adventure. . . Knight's Shadow is a strong tale in its own right * Fanboy Comics *
It's easy to love de Castell's work. Two books in and "Greatcoats" still remains approachable and readable fantasy at its finest * Upcoming4.me *
Sebastien De Castell manages to wring every heart wrenching moment and ounce of anticipation from every scene, his fight scenes contain dark humour, explosive action and a great awareness of the art of sword fighting, all of which has you hanging on the edge of every page. . . . This really is an exceptional book and series * Parmenion Books *
Everything that de Castell did well in the first book - the action, the adventure, the high drama, the zinging character interaction and dialogue - is taken to a fresh level here . . . Knight's Shadow raises its own bar . . . This story is bigger, darker and full of more violence than its predecessor * Over the Effing Rainbow *
Greatcoats is now up there on my list of favorite fantasy series * Bibliosanctum *
A breathless rollercoaster of a ride that will engage, fascinate and compel the reader ever onwards, there is a beauty to the tale that gets right to the heart of you . . . this is exactly how it should be done * Liz Loves Books *
The fantastic dialogue, the humor, the twists and the exhilarating action all make this a worthy sequel to Traitor's Blade * Draumr Kopa Blog *
I would still very much recommend the series to anyone looking for a well-written fantasy series * Civilian Reader *
Action, drama, betrayals, I do look forward to reading more * Books For Life *
One of the best book's you'll read this year, coming highly recommended. 9.5/10 * The Fictional Hangout *
The best book I have read this year . . . I think everyone who enjoys a good story of adventure should pick up their copies of Traitor's Blade and Knight's Shadow first chance they get! * Arched Doorway *
This ends on a satisfying conclusion that leaves room for the story to continue * Starburst Magazine *
It was what I was hoping for and I was not disappointed! * Not Yet Read *
Truly is a must-read book . . . the kind of historical fantasy that makes everything else pale in comparison * Beauty in Ruins *
This second book has cemented my love for the series . . . It was so invigorating to go on this dangerous, and sometimes painful, but ultimately satisfying adventure with Falcio, Kest, Brasti and the rest of the Greatcoats. This is a series I recommend everyone to read! * Bookish Wimsy *
I loved the story, I loved the style, the book just kept on giving and never lets you down. It's a perfect fantasy story * Book Geek Says *
This book brought me to tears on numerous occasions, I felt so deeply involved with the plot and the characters . . . I don't think I'll ever tire of this series * Juniper's Jungle *
Knights Shadow is a perfect book if you love engaging and hilarious characters, amazingly well sculpted fight scenes and that rush of excitement that only comes with being truly and utterly swept away by a writer of incredible talent * A Reading Machine *
Better than its predecessor, Knight's Shadow is a wonderful sequel, managing to keep the tone of the original intact while at the same time expanding the themes that made it so good. The Greatcoats series is thriving, and I look forward to the next installment * Sean's Blog Now *
A very entertaining series * Fantasy Review Barn *
Resonates long after you close the book * Jennifer Melzer *
The story was so gripping . . . I couldn't tear my eyes away. Recommended 100% * The Endless Reading List *
Knight's Shadow is just amazing. The Greatcoats series with Traitor's Blade and Knight's Shadow should be on every reading list. Period. * The Book Plank *
De Castell's superb writing and pacing results in a headlong rush of excitement to the very last page . . . The twists and turns make "Knight's Shadow" a page-turner in the truest, most satisfactory sense of the term * NewsOK *

Sebastien de Castell had just finished a degree in archaeology when he started work on his first dig. Four hours later he realised how much he hated archaeology and left to pursue a very focused career as a musician, ombudsman, interaction designer, fight choreographer, teacher, project manager, actor and product strategist. After a year in the Netherlands, he has recently returned to Vancouver, Canada, where he lives with his wife and two belligerent cats. Traitor's Blade, his award-winning debut novel, the first in his bestselling series The Greatcoats, is followed by Knight's Shadow, Saint's Blood and Tyrant's Throne. He is also writing a YA series, starting with Spellslinger.

NGR9781782066781
Knight's Shadow: The Greatcoats Book 2 by Sebastien de Castell
Sebastien de Castell
The Greatcoats
New
Paperback
Quercus Publishing
2016-04-07
624
1782066780
9781782066781
N/A
Book picture is for illustrative purposes only, actual binding, cover or edition may vary.
This is a new book - be the first to read this copy. With untouched pages and a perfect binding, your brand new copy is ready to be opened for the first time.