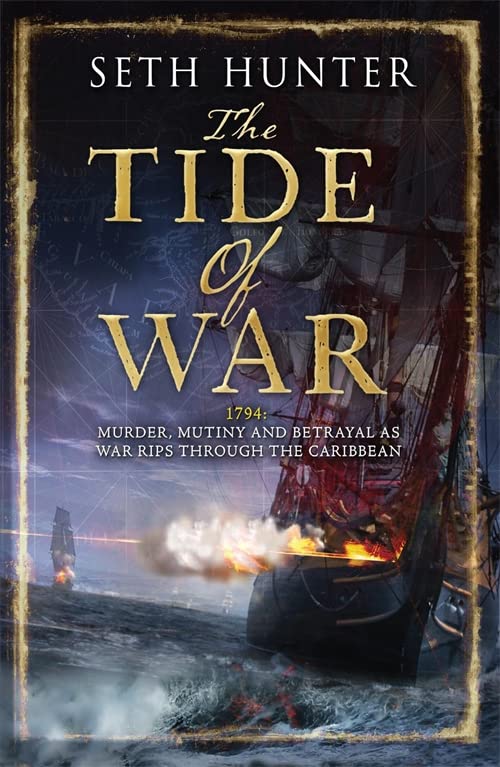 The Tide of War by Seth Hunter

The Tide of War: A fast-paced naval adventure of bloodshed and betrayal at sea by Seth Hunter

'This book has it all; naval battles, mutiny, pirates, spies - even a witch queen! Will be welcomed by lovers of naval historical fiction' Daily Mail

Newly-promoted Captain Nathan Peake is despatched to the Caribbean to take command of the British navy's latest frigate, the 32-gun Unicorn. But the Unicorn already has a tragic history of mutiny - and murder.

Meanwhile the Revolutionary authorities in Paris have sent the best frigate in the French fleet, the 44-gun Virginie, on a secret mission to spread mayhem from the shores of Cuba to the swamps of the Mississippi Delta.

While the Unicorn embarks on her epic duel with the Virginie, Nathan confronts the seductive charms of Sabine Delatour, witch queen of the Army of Lucumi, the intrigues of the American agent Gilbert Imlay...

What readers are saying about THE TIDE OF WAR:

'[Seth Hunter is] a worthy challenger to the nautical stories of Patrick O'Brien and Dudley Pope. The pacing is relentless and totally absorbing'

'The research and description of the time is excellent. A first-class read'

'This book has it all; naval battles, mutiny, pirates, spies - even a witch queen! Will be welcomed by lovers of naval historical fiction' * Daily Mail *
'Really engaging. Seth Hunter has a more natural storyteller's eye than [Patrick] O'Brian... well wrought and deftly told' * Telegraph *
Seth Hunter is the pseudonym of the author of a number of highly acclaimed and prize-winning adult and children`s novels. He has written and directed many historical dramas for television, radio and the theatre. Seth Hunter lives in London.
GOR001783790
9780755357611
0755357612
The Tide of War: A fast-paced naval adventure of bloodshed and betrayal at sea by Seth Hunter
Seth Hunter
Used - Very Good
Paperback
Headline Publishing Group
2010-02-04
448
N/A
Book picture is for illustrative purposes only, actual binding, cover or edition may vary.
This is a used book - there is no escaping the fact it has been read by someone else and it will show signs of wear and previous use. Overall we expect it to be in very good condition, but if you are not entirely satisfied please get in touch with us
Trustpilot