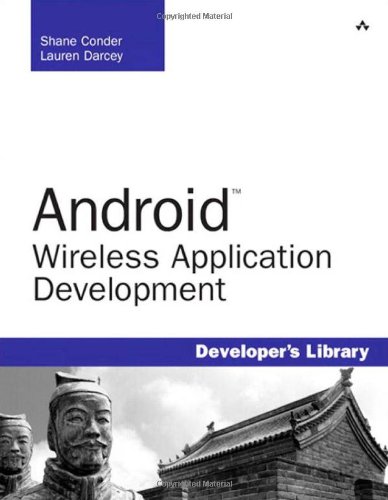 In Stock
£14.99
This start-to-finish guide to Android development combines all the reliable information, sample code, and best practices professionals need to build, distribute, and market successful Android mobile applications. The CD-ROM contains all of the book's code samples and more.
Very Good Good
Only 3 left

The authors offer a learning resource to anyone who wishes to become a mobile developer using the Android platform. The text covers application design, development, debugging, packaging, distribution & much more.

has extensive development experience and has focused his attention on

mobile and embedded development for the past decade. He has designed and developed

many commercial applications for BREW, J2ME, Palm,Windows Mobile, and Android.

platforms on his tech blogs and is well known within the blogosphere. Shane

received a B.S. degree in computer science from the University of California.

A self-admitted gadget freak, Shane always has the latest phone or laptop. He can

often be found fiddling with the latest new technologies, such as Amazon Web Services,

Android, iPhone, Google App Engine, and other shiny, new technologies that activate the

creative part of his brain. He also enjoys traveling the world with his geeky wife, even if

she did make him dive with 4-meter-long great white sharks, and he almost got eaten by

a lion in Kenya. He admits that it was his fault they got attacked by monkeys in Japan

and that perhaps he should have written his own bio. (Author's note:Wait, what?!)

company specializing in mobile technologies-Android being the most exciting

and promising for the future.With almost two decades of experience in professional software

production, Lauren is a recognized authority in enterprise architecture and the

computer science from the University of California, Santa Cruz.

husband and is an avid nature photographer. Her work has been published in

books and newspapers around the world. In South Africa, she dove with 4-meter-long

bull elephant. She's been attacked by monkeys in Japan, gotten stuck in a ravine

in Thailand, and walked part of the Great Wall of China, where she took the photograph

that graces the cover of this book.

GOR004704733
Android Wireless Application Development by Shane Conder
Shane Conder
Used - Very Good
Hardback
Pearson Education (US)
2009-08-28
600
0321627091
9780321627094
N/A
Book picture is for illustrative purposes only, actual binding, cover or edition may vary.
This is a used book - there is no escaping the fact it has been read by someone else and it will show signs of wear and previous use. Overall we expect it to be in very good condition, but if you are not entirely satisfied please get in touch with us.