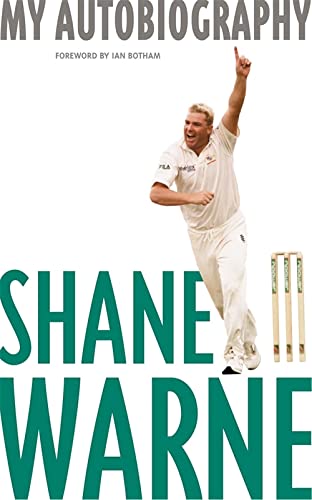 In Stock
£4.49
The autobiography of the best bowler in the world, fully updated to include the Ashes tour of 2001
Very Good Good
Only 2 left

Shane Warne is arguably the greatest spinner of all time - he has taken 356 wickets in 82 tests since his debut in the Sydney Test in the 1991-92 series.

Here he talks about his early ambitions, and offers a colourful narrative account of the various Ashes series in which he has been involved. He also offers his personal views on sportsmanship and the relationship between Australia and Sri Lanka, as well as providing his thoughts on captaincy and the leg-spinners he respects. He talks candidly about his fascination with gambling, and about the conflict between his public persona and private life.

Warne, who has had the last laugh on many a batsman, wants the last word and gets it. * Sunday Times *
Warne's thoughts on the English game and players, sledging, the Ashes, sponsership and the media are fascinating. * The Independent *
Shane Warne's excellent autobiography is much easier to read than his bamboozling leg spin....the plain-talking Australian bowler's laid-back approach is translated effortlessly. * Sunday Express *
A fascinating insight into top class sport. * Birmingham Evening Mail *
Spicy revelations and treats galore. * Scotland on Sunday *

Born in Victoria, Australia in 1969, Shane Warne emerged in the early 1990s as a bowler whom many would now consider the greatest spinner of all time. He made his test debut against India at Sydney in 1991-2. By the end of 1996, he had dismissed Gooch, Atherton, Stewart and Thorpe, England's leading batsmen, six times each in 11 Tests. He currently plays for Hampshire.

GOR001108408
Shane Warne: My Autobiography by Shane Warne
Shane Warne
Used - Very Good
Paperback
Hodder & Stoughton
2002-05-02
384
0340769874
9780340769874
N/A
Book picture is for illustrative purposes only, actual binding, cover or edition may vary.
This is a used book - there is no escaping the fact it has been read by someone else and it will show signs of wear and previous use. Overall we expect it to be in very good condition, but if you are not entirely satisfied please get in touch with us.