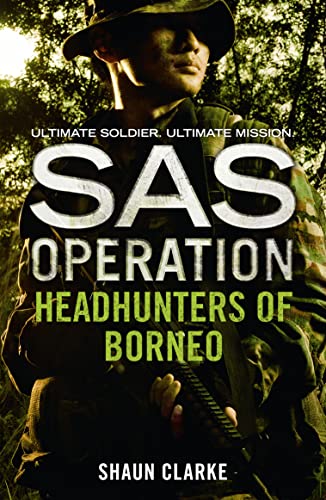 Headhunters of Borneo
by Shaun Clarke

Ultimate soldier. Ultimate mission. But can the SAS recruit primitive natives to help them thwart an invading rebel force?

Ultimate soldier. Ultimate mission. But can the SAS recruit primitive natives to help them thwart an invading rebel force?

1963: Viewing the formation of a new political entity, the Federation of Malaysia, as a threat to his dreams of expansion, Indonesian President Sukarno orders insurgents into Borneo. In response, the British organize a force of Malay, British and Commonwealth troops to contain the rebels.

What is desperately needed, however, is a specialist group who can perform highly dangerous and arduous military tasks in the inhospitable, perilous terrain. Braving jungle and swamp, the SAS are dispatched to live with the primitive, headhunting natives, to try to win hearts and minds with medical aid and assistance, in the hope of recruiting them as Border Scout paramilitaries.

As the training progresses, other SAS soldiers move even deeper into the unexplored jungle - `the Gap' - to establish ambush sites and helicopter LZs. These `Tiptoe Boys' conduct daring `Claret' raids across the border, hitting hard and vanishing fast, ambushing enemy troops moving along the many jungle tracks and rivers. It will be a bloody, nightmarish war - and the SAS must win it.

GOR008037603
Headhunters of Borneo (SAS Operation) by Shaun Clarke
Shaun Clarke
SAS Operation
Used - Very Good
Paperback
HarperCollins Publishers
2016-06-16
208
0008155038
9780008155032
N/A
Book picture is for illustrative purposes only, actual binding, cover or edition may vary.
This is a used book - there is no escaping the fact it has been read by someone else and it will show signs of wear and previous use. Overall we expect it to be in very good condition, but if you are not entirely satisfied please get in touch with us.