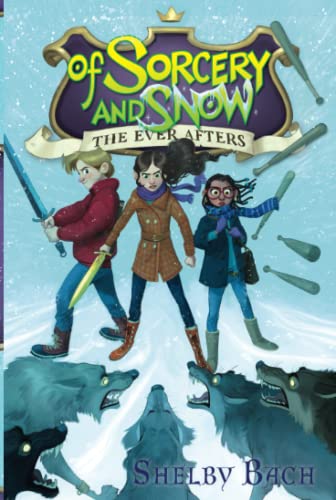 Of Sorcery and Snow
by Shelby Bach

In Stock
£11.99
"Rory Landon sets off on another tale from The Ever After School in order to end the reign of the Snow Queen"--
Very Good
Only 1 left

Of Sorcery and Snow Summary

Of Sorcery and Snow by Shelby Bach

Rory might be ready to star in her own fairy tale, but there's more danger than happily-ever-after in this third book in the Ever After series, which Kirkus Reviews calls a "fast-paced combination of middle school realism and fairy-tale fantasy."

Life at Ever After School has become familiar for Rory. She's been on two quests, she's a great sword fighter, and she has terrific friends. But familiar is no fairy tale, and Rory is still anxiously awaiting the chance to star in her own.

But as her connection to the Snow Queen continues to grow, Rory realizes her starring role might be well underway. When the Snow Queen sends the Pied Piper to kidnap several children, including the sibling of a fellow EAS-er, the teachers think the rescue mission is too dangerous and won't send any kids. But Rory, Chase, and Lena are determined to help, and it's not long before they find themselves in more trouble than they can handle. Then again, it wouldn't be Ever After School if things worked out according to plan...

Of Sorcery and Snow Reviews

"This fast-paced combination of middle school realism and fairy-tale fantasy will appeal particularly to imaginative readers already familiar with traditional tales."--Kirkus Reviews on Of Giants and Ice
"There's plenty of magic and enough twists and turns to entice even reluctant readers. The relationships among the three strong protagonists develop believably, and the secondary characters have enough dimension to maintain interest. This debut novel is a light, fun look at fairy tales after the "happily ever after."--School Library Journal on Of Giants and Ice
"A fresh take on the whole fairy-tales-made-real theme. Full of action, humor, realistic school dynamics, and plenty of opportunity for future books, this one should be popular."--Booklist on Of Giants and Ice
"Fans of the first two installments will be eager to catch up with Rory."--School Library Journal

Shelby Bach grew up reading every book she could find and writing stories in battered notebooks. She also rarely came home with a clean shirt and had a lot of accidents that ended with a hunt for Band-Aids. Nowadays, she writes on her laptop rather than in a notebook, but not much else has changed. She is the author of the Ever Afters series, which includes Of Giants and Ice, Of Witches and Wind, Of Sorcery and Snow, and Of Enemies and Endings. She lives in Charlotte, North Carolina.

GOR009949064
Of Sorcery and Snow by Shelby Bach
Shelby Bach
Ever Afters
Used - Very Good
Paperback
Simon & Schuster
2015-07-01
352
1442497858
9781442497856
N/A
Book picture is for illustrative purposes only, actual binding, cover or edition may vary.
This is a used book - there is no escaping the fact it has been read by someone else and it will show signs of wear and previous use. Overall we expect it to be in very good condition, but if you are not entirely satisfied please get in touch with us.