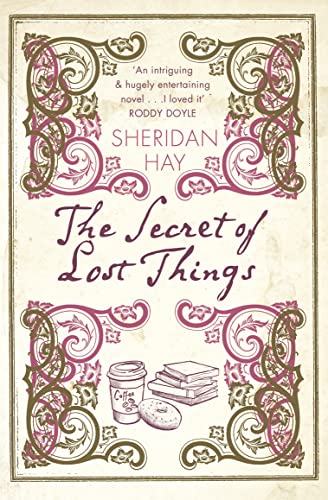 The Secret of Lost Things
by Sheridan Hay

A stunning debut from a new Australian writer - the story of a treasure hunt through a vast New York bookshop.

The Secret of Lost Things Summary

The Secret of Lost Things by Sheridan Hay

A stunning debut from a new Australian writer - the story of a treasure hunt through a vast New York bookshop.

At eighteen, Rosemary arrives in New York from Tasmania with little more than her love of books and an eagerness to explore the city she's read so much about. The moment she steps into the Arcade bookstore, she knows she has found a home. The gruff owner, Mr. Pike, gives her a job sorting through huge piles of books and helping the rest of the staff - a group as odd and idiosyncratic as the characters in a Dickens novel.

There's Pearl, the loving, motherly transsexual who runs the cash register; Oscar, who shares his extensive, eclectic knowledge with Rosemary, but furiously rejects her attempts at a more personal relationship; and Arthur Pick, who supervises the art section and demonstrates a particular interest in photography books featuring naked men. The store manager Walter Geist is an albino, a lonely figure even within the world of the Arcade. When Walter's eyesight begins to fail, Rosemary becomes his assistant. And so it is Rosemary who first reads the letter from someone seeking to `place' a lost manuscript by Herman Melville. Mentioned in Melville's personal correspondence but never published, the work is of inestimable value, and proof of its existence brings the simmering ambitions and rivalries of the Arcade staff to a boiling point.

Based on actual documents the author found while doing research on Melville, `The Secret of Lost Things' is at once a literary adventure that captures the excitement of discovering a long-lost manuscript, and an evocative portrait of life in a bookshop.

The Secret of Lost Things Reviews

'I loved "The Secret of Lost Things". I loved the Arcade bookstore and the characters Sheridan Hay has created to occupy it. They are all a bit mad and very alive in this intriguing and hugely entertaining novel.' Roddy Doyle

`Sheridan Hay writes with a watchful eye and a nuanced heart, investing us in the fate of Rosemary Savage and the drama of bookish obsession becoming obsession plain and simple. She tracks her vivid eccentrics, flushes out their desperate natures, and suddenly we feel the old business of innocence and experience freshly lit. The tormented spirit of Melville comes gusting through, but by design - "The Secret of Lost Things"forges ahead on its own strong sail.' Sven Birkerts, author of The Guttenberg Elegies

'Hay writes with great charm, and her whimsical, coming-of-age novel keeps the reader hooked form the first to the last page.' Times

Sheridan Hay was born in Tasmania. She worked in bookstores and in publishing for many years, and holds an MFA in writing and literature from Bennington. She has published short stories and teaches writing in the graduate program at Parson's School of Design, at The New School. This is her first novel.

GOR001192895
The Secret of Lost Things by Sheridan Hay
Sheridan Hay
Used - Very Good
Paperback
HarperCollins Publishers
2008-07-08
304
0007243928
9780007243921
N/A
Book picture is for illustrative purposes only, actual binding, cover or edition may vary.
This is a used book - there is no escaping the fact it has been read by someone else and it will show signs of wear and previous use. Overall we expect it to be in very good condition, but if you are not entirely satisfied please get in touch with us.