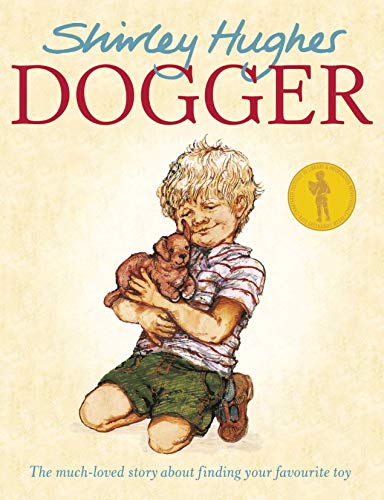 In Stock
£6.99
When Dave loses his favourite toy, Dogger, he is desolate. But then Dogger turns up at the school summer fair, and everything seems all right - until someone else buys him before Dave can get the money!
New£6.99
5 in stock

When Dave loses his favourite toy, Dogger, he is desolate. But then Dogger turns up at the school summer fair, and everything seems all right - until someone else buys him before Dave can get the money!

"This is Hughes' most heartwarming picture book . . . Hughes has a kindly, inexhaustible eye - she misses nothing . . . Her drawing is invariably superb and usually describes a reassuring world for chidlren - sometimes happier-than-thou. She has illustrated more than 200 titles - she is a virtuoso" * Observer *
"Shirley Hughes is a national treasure"
"Delightful" * Financial Times *
"A heart-warming story . . . Shirley Hughes' warm and deceptively simple story is a perennial favourite among children and experts alike" * Psychologies Magazine *
"There are certain books that should be in every family's library and Dogger is certainly one of them" * Books for Children *