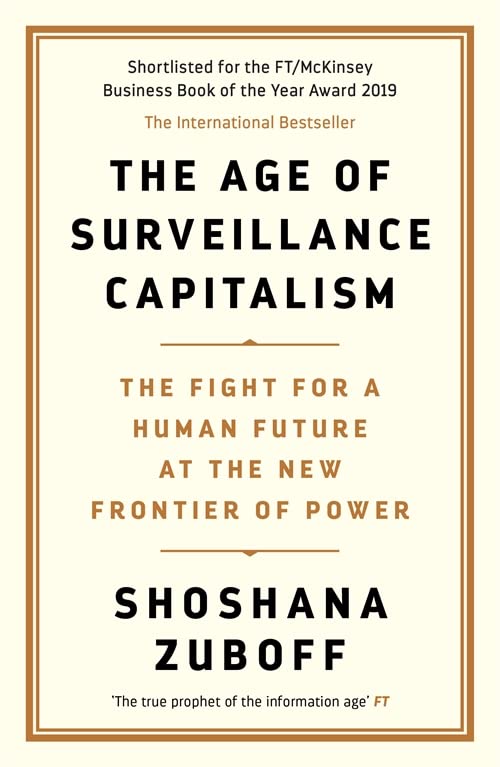 The Age of Surveillance Capitalism
by Shoshana Zuboff

The Age of Surveillance Capitalism Summary

The Age of Surveillance Capitalism: The Fight for a Human Future at the New Frontier of Power: Barack Obama's Books of 2019 by Shoshana Zuboff

THE TOP 10 SUNDAY TIMES BESTSELLER A NEW YORK TIMES NOTABLE BOOK OF THE YEAR ONE OF BARACK OBAMA'S TOP BOOKS OF THE YEAR Shortlisted for The Orwell Prize 2020 Shortlisted for the FT Business Book of the Year Award 2019 'Easily the most important book to be published this century. I find it hard to take any young activist seriously who hasn't at least familarised themselves with Zuboff's central ideas.' - Zadie Smith, The Guardian The challenges to humanity posed by the digital future, the first detailed examination of the unprecedented form of power called "surveillance capitalism," and the quest by powerful corporations to predict and control us. The heady optimism of the Internet's early days is gone. Technologies that were meant to liberate us have deepened inequality and stoked divisions. Tech companies gather our information online and sell it to the highest bidder, whether government or retailer. Profits now depend not only on predicting our behaviour but modifying it too. How will this fusion of capitalism and the digital shape our values and define our future? Shoshana Zuboff shows that we are at a crossroads. We still have the power to decide what kind of world we want to live in, and what we decide now will shape the rest of the century. Our choices: allow technology to enrich the few and impoverish the many, or harness it and distribute its benefits. The Age of Surveillance Capitalism is a deeply-reasoned examination of the threat of unprecedented power free from democratic oversight. As it explores this new capitalism's impact on society, politics, business, and technology, it exposes the struggles that will decide both the next chapter of capitalism and the meaning of information civilization. Most critically, it shows how we can protect ourselves and our communities and ensure we are the masters of the digital rather than its slaves.

The Age of Surveillance Capitalism Reviews

Shoshana Zuboff has been called 'the true prophet of the information age' by the Financial Times for her ground-breaking book, In the Age of the Smart Machine. She is now the Charles Edward Wilson Professor Emerita at Harvard Business School as well as Faculty Associate at the Berkman Center for Internet and Society at Harvard Law School. In 2006, strategy+business magazine named her one of the eleven most original business thinkers in the world.

GOR010023212
The Age of Surveillance Capitalism: The Fight for a Human Future at the New Frontier of Power: Barack Obama's Books of 2019 by Shoshana Zuboff
Shoshana Zuboff
Used - Very Good
Paperback
Profile Books Ltd
2019-09-05
704
1781256853
9781781256855
N/A
Book picture is for illustrative purposes only, actual binding, cover or edition may vary.
This is a used book - there is no escaping the fact it has been read by someone else and it will show signs of wear and previous use. Overall we expect it to be in very good condition, but if you are not entirely satisfied please get in touch with us.