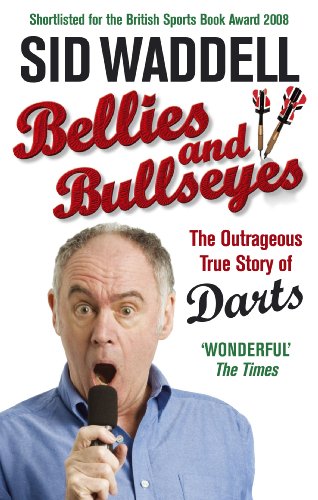 Bellies and Bullseyes
by Sid Waddell

Out of Stock
Bellies and Bullseyes is simply the greatest account there will ever be about the sport of darts - as told by one of its most legendary characters - Sid Waddell.
Very Good
Only 0 left

Bellies and Bullseyes: The Outrageous True Story of Darts by Sid Waddell

Bellies and Bullseyes is simply the greatest account there will ever be about the sport of darts - as told by one of its most legendary characters - Sid Waddell. It mixes Sid's own personal journey from the coalfields of the North East with the entire history of the sport. What is revealed is a hilarious yet epic Darts Babylon, covering every significant event and every character to walk the oche from Eric 'The Crafty Cockney' Bristow to Phil 'The Power' Taylor. In words as ripe as his commentaries, Sid brings an authentic whiff of fags, hard drink, hot tungsten and moist polyester to the whole cabaret. Sid has been friend and confidante to most of darts' stars over the years as well as being instrumental in the game's progress himself. Nobody is equipped to tell the story quite like he is. From the early days of hustling in bars and the 1960s money-race pub competitions that spawned the likes of John Lowe and Leighton Rees, to ITV's brilliantly daft The Indoor League and the glory days of BBC's coverage; from the bling of Bobby George and the belly of Jocky Wilson to the awesome professionalism of Phil Taylor; from smoky Northern working men's clubs to the Houses of Parliament; this is the complete, incredible story of darts.

"Wonderful" * The Times *
"Sid Waddell's commentaries are the black puddings of sports reporting, savoury, hot and bursting with blood and guts" -- Nancy Banks-Smith * Guardian *
"We are lucky to be alive in the era of Sid" -- Giles Smith * Daily Telegraph *
"Entertaining ... an enjoyable and important read from the man who has been at the heart of many of the great moments in the history of the sport" * Independent *
"A fascinating, well-structured, readable and at times hilarious history of modern darts" * Darts World *

Sid Waddell, 'The Geordie Lip', the Moses of the game, was born in Northumberland in 1940, the son of a miner. Having graduated with a degree in History from Cambridge University, he started out as a TV producer working on Indoor League in the early 1970s. This led to him receiving the back-handed compliment of being asked to be the BBC's lead commentator on all their major BDO televised darts tournaments. He worked for them in this capacity from 1978 to 1993 during which time he also penned the highly successful children's television series Jossy's Giants. Since 1993 he has worked for Sky Television and commentates on all major PDC televised darts tournaments.

GOR001195215
Bellies and Bullseyes: The Outrageous True Story of Darts by Sid Waddell
Sid Waddell
Used - Very Good
Paperback
Ebury Publishing
2008-08-07
368
0091917565
9780091917562
Short-listed for British Sports Book Awards: Autobiography 2008
Book picture is for illustrative purposes only, actual binding, cover or edition may vary.
This is a used book - there is no escaping the fact it has been read by someone else and it will show signs of wear and previous use. Overall we expect it to be in very good condition, but if you are not entirely satisfied please get in touch with us.