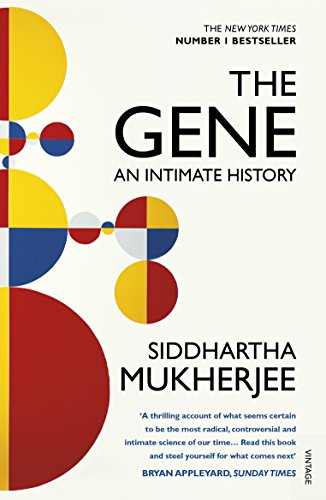 The Gene
by Siddhartha Mukherjee

In Stock
£9.99
Spanning the globe and several centuries, this is the story of the quest to decipher the master-code that makes and defines humans, that governs our form and function. It is also an intimate history of the author's own family and its recurring pattern of mental illness, reminding us that genetics is vitally relevant to everyday lives.
Very Good
Only 1 left

The Gene: An Intimate History by Siddhartha Mukherjee

The Gene is the story of one of the most powerful and dangerous ideas in our history from the author of The Emperor of All Maladies.

The story begins in an Augustinian abbey in 1856, and takes the reader from Darwin's groundbreaking theory of evolution, to the horrors of Nazi eugenics, to present day and beyond - as we learn to "read" and "write" the human genome that unleashes the potential to change the fates and identities of our children.

Majestic in its scope and ambition, The Gene provides us with a definitive account of the epic history of the quest to decipher the master-code that makes and defines humans - and paints a fascinating vision of both humanity's past and future.

For fans of Sapiens by Yuval Noah Harari, A Brief History of Time by Stephen Hawking and Being Mortal by Atul Gwande.

'Siddhartha Mukherjee is the perfect person to guide us through the past, present, and future of genome science' Bill Gates

'A thrilling and comprehensive account of what seems certain to be the most radical, controversial and, to borrow from the subtitle, intimate science of our time...Read this book and steel yourself for what comes next' Sunday Times

With a marriage of architectural precision and luscious narrative, an eye for both the paradoxical detail and the unsettling irony, and a genius for locating the emotional truths buried in chemical abstractions, Mukherjee leaves you feeling as though you've just aced a college course for which you'd been afraid to register - and enjoyed every minute of it -- Andrew Solomon * Washington Post *
[Siddhartha Mukherjee] is the perfect person to guide us through the past, present, and future of genome science... It is up to all of us-not just scientists, government officials, and people fortunate enough to lead foundations-to think hard about these new technologies and how they should and should not be used. Reading The Gene will get you the point where you can actively engage in that debate. -- Bill Gates * Gatesnotes *
The Gene is prodigious, sweeping, and ultimately transcendent. If you're interested in what it means to be human, today and in the tomorrows to come, you must read this book. -- Anthony Doerr, Pulitzer Prize-winning author of All the Light We Cannot See
Dramatic and precise... [A] thrilling and comprehensive account of what seems certain to be the most radical, controversial and, to borrow from the subtitle, intimate science of our time... He is a natural storyteller... A page-turner... Read this book and steel yourself for what comes next. -- Bryan Appleyard * Sunday Times *
The story [...] has been told, piecemeal, in different ways, but never before with the scope and grandeur that Siddhartha Mukherjee brings to his new history, The Gene. He fully justifies the claim that it is "one of the most powerful and dangerous ideas in the history of science." ... Definitive -- James Gleick * New York Times Book Review *

Siddhartha Mukherjee is a cancer physician and researcher, a stem cell biologist and a cancer geneticist. He is the author of The Laws of Medicine and The Emperor of All Maladies: A Biography of Cancer, which won the 2011 Pulitzer Prize in general nonfiction and the Guardian First Book Award.

Mukherjee is an assistant professor of medicine at Columbia University. A Rhodes Scholar, he graduated from Stanford University, University of Oxford, and Harvard Medical School. His laboratory has identified genes that regulate stem cells, and his team is internationally recognized for its discovery of skeletal stem cells and genetic alterations in blood cancers.

He has published work in Nature, Cell, Neuron, The New England Journal of Medicine, the New York Times and several other magazine and journals. He lives with his family in New York City.

GOR008368424
The Gene: An Intimate History by Siddhartha Mukherjee
Siddhartha Mukherjee
Used - Very Good
Paperback
Vintage Publishing
2017-03-23
608
0099584573
9780099584575
Short-listed for Royal Society Insight Investment Science Book Prize 2016 (UK) Short-listed for Wellcome Book Prize 2017 (UK)
Book picture is for illustrative purposes only, actual binding, cover or edition may vary.
This is a used book - there is no escaping the fact it has been read by someone else and it will show signs of wear and previous use. Overall we expect it to be in very good condition, but if you are not entirely satisfied please get in touch with us.