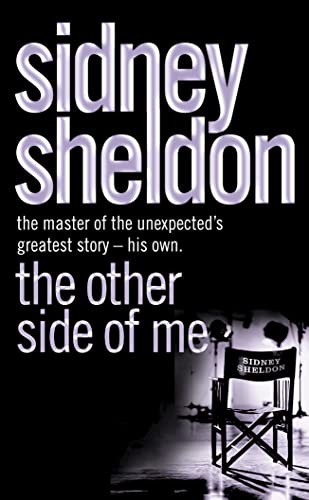 The Other Side of Me
by Sidney Sheldon

A brilliant, highly spirited memoir of Sidney Sheldon's early life that provides as compulsively readable and racy a narrative as any of his bestselling novels.

The Other Side of Me Summary

The Other Side of Me by Sidney Sheldon

A brilliant, highly spirited memoir of Sidney Sheldon's early life that provides as compulsively readable and racy a narrative as any of his bestselling novels.

Growing up in 1930s America, the young Sidney knew what it was to struggle to get by. Millions were out of work and the Sheldon family was forced to journey around America in search of employment. Grabbing every chance he could, Sidney worked nights as a busboy, a clerk, an usher - anything - but he dreamt of becoming something more.

His dream was to become a writer and to break Hollywood. By a stroke of luck, he found work as a reader for David Selznick, a top Hollywood producer, and the dream began to materialise.

Sheldon worked through the night writing stories for the movies, and librettos for the musical theatre. Little by little he gained a reputation and soon found himself in demand by the hottest producers and stars in Hollywood.

But, this was wartime Hollywood and Sidney had to play his part. He trained as a pilot in the US Army Air Corps and waited for the call to arms which could put a stop to his dreams of stardom.

Returning to Hollywood and working with actors like Cary Grant and Shirley Temple; with legendary producers like David Selznick and Dore Schary; and musical stars like Irving Berlin, Judy Garland and Gene Kelly, memories of poverty were finally behind Sheldon. This is his story: the story of a life on both sides of the tracks, of struggles and of success, and of how one man rose against the odds to become the master of his game.

The Other Side of Me Reviews

`Sheldon is an author working at the height of his power.' New York Times

`Fast-moving ... engrossing ... Sidney Sheldon is a master at giving the public what it wants.' Los Angeles Times

A master storyteller, Sidney Sheldon is the author of seventeen novels (which have sold over 300 million copies), over 200 television scripts, twenty-five major motion pictures and six Broadway plays, ranking him as one of the world's most prolific writers.

GOR001204352
The Other Side of Me by Sidney Sheldon
Sidney Sheldon
Used - Very Good
Paperback
HarperCollins Publishers
2006-08-07
448
0007165188
9780007165186
N/A
Book picture is for illustrative purposes only, actual binding, cover or edition may vary.
This is a used book - there is no escaping the fact it has been read by someone else and it will show signs of wear and previous use. Overall we expect it to be in very good condition, but if you are not entirely satisfied please get in touch with us.