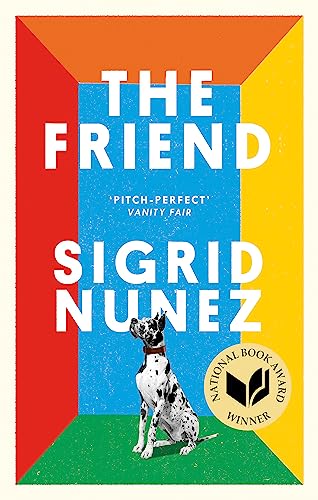 The Friend
by Sigrid Nunez

Used Price
£4.49
New RRP £8.99
Free Shipping in the UK
WINNER OF THE 2018 NATIONAL BOOK AWARD and a NEW YORK TIMES BESTSELLER: a moving story of love, friendship, grief, healing, and the magical bond between a woman and her dog.
Like New Very Good

The Friend: Winner of the National Book Award for Fiction by Sigrid Nunez

A moving story of love, friendship, grief, healing, and the magical bond between a woman and her dog.

'A true delight: I genuinely fear I won't read a better novel this year' FINANCIAL TIMES

'Loved this. A funny, moving examination of love, grief, and the uniqueness of dogs' GRAHAM NORTON

When a woman unexpectedly loses her lifelong best friend and mentor, she finds herself burdened with the unwanted dog he has left behind. Her own battle against grief is intensified by the mute suffering of the dog, a huge Great Dane, and by the threat of eviction: dogs are prohibited in her apartment building.

Isolated from the rest of the world, increasingly obsessed with the dog's care, determined to read its mind and fathom its heart, she comes dangerously close to unravelling. But while troubles abound, rich and surprising rewards lie in store for both of them.

'I loved it . . . It's one of my favourite books and it moved me' WHOOPI GOLDBERG

A true delight: I genuinely fear I won't read a better novel this year * Financial Times *
A beautiful book . . . crammed with a world of insight into death, grief, art, and love * Wall Street Journal *
Very very clever. Mature. Entertaining. Eminently readable and re-readable. In short, absolutely delightful. * Irish Times *
Delicious ... An intensely pleasurable read because it is so accessible, capacious and clever * Sunday Times *
A pitch-perfect novel ... Wry and moving, The Friend is a love story, a mania story and a recovery story * Vanity Fair *
Loved this. A funny, moving examination of love, grief, and the uniqueness of dogs * Graham Norton *
A sneaky gut punch of a novel . . . a consummate example of the human-animal tale * Harper's Magazine *
The book is an intimate, beautiful thing, deceptively slight at around 200 pages, but humming with insight . . . [an] artfully discursive meditation on friendship, love, death, solitude, canine companionship and the life of an aging writer in New York .. peppered with wry observations * The Economist *
I loved it . . . It's one of my favourite books and it moved me * Whoopi Goldberg, The View *
A poignant reflection on loss and companionship * Marie Claire *
Often as funny as it is thoughtful, The Friend is an elegant meditation on grief, friendship, healing, and the bonds between humans and dogs * Buzzfeed *
An elegant and darkly humorous meditation on grief and companionship, it's a great read - whether or not you're obsessed with canines * Shondaland.com *
Charming ... the comedy here writes itself... The snap of her sentences sometimes puts me in mind of Rachel Cusk * New York Times *
The contemplation of writing and the loss of integrity in our literary life form the heart of the novel . . . Nunez's prose itself comforts us. Her confident and direct style uplifts - the music in her sentences, her deep and varied intelligence. She addresses important ideas unpretentiously and offers wisdom for any aspiring writer who, as the narrator fears, may never know this dear, intelligent friend - or this world that is dying. But is it dying? Perhaps. But with The Friend, Nunez provides evidence that, for now, it survives * New York Times Book Review *
In crystalline prose, Nunez creates an impressively controlled portrait of the 'exhaustion of mourning' * New Yorker *
Astonishingly fresh and tinged with sadness . . . a highly entertaining, uplifting book exploring the magical bond between humans and canines. A must-read for dog-lovers. -- Rebecca Wallersteiner * The Lady *

Sigrid Nunez has published seven novels, including A Feather on the Breath of God, The Last of Her Kind, Salvation City, and, most recently, The Friend, which won the National Book Award 2018. She is also the author of Sempre Susan: A Memoir of Susan Sontag. Among the journals to which she has contributed are The New York Times, The Wall Street Journal, The Paris Review, Threepenny Review, Harper's, McSweeney's, Tin House, The Believer and newyorker.com. Her work has also appeared in several anthologies, including four Pushcart Prize volumes and four anthologies of Asian-American literature.

Sigrid's honors and awards include a Whiting Writer's Award, a Berlin Prize Fellowship, and two awards from the American Academy of Arts and Letters: the Rosenthal Foundation Award and the Rome Prize in Literature. The Friend won the 2018 National Book Award. She has taught at Columbia, Princeton, Boston University, and the New School, and has been a visiting writer or writer in residence at Amherst, Smith, Baruch, Vassar, and the University of California, Irvine, among others. In spring, 2019, she will be visiting writer at Syracuse University. Sigrid has also been on the faculty of the Bread Loaf Writers' Conference and of several other writers' conferences across the country. She lives in New York City.

GOR009687263
The Friend: Winner of the National Book Award for Fiction by Sigrid Nunez
Sigrid Nunez
Used - Like New
Paperback
Little, Brown Book Group
2019-01-08
224
0349012814
9780349012810
N/A
Book picture is for illustrative purposes only, actual binding, cover or edition may vary.
The book has been read, but looks new. The book cover has no visible wear, and the dust jacket is included if applicable. No missing or damaged pages, no tears, possible very minimal creasing, no underlining or highlighting of text, and no writing in the margins.