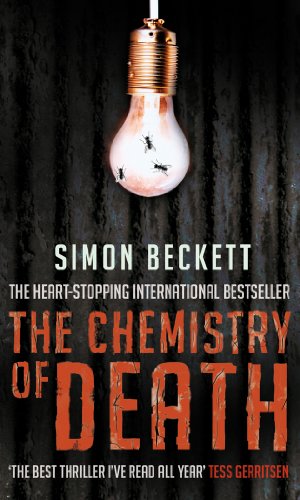 The Chemistry of Death
by Simon Beckett

In Stock
£3.99
'A classy debut' The Times 'Best thriller I've read all year' Tess GerritsenDr David Hunter hoped he might at last have put the past behind him. But then they found what was left of Sally Palmer . .
Very Good Good
8 in stock

The Chemistry of Death Summary

The Chemistry of Death: The skin-crawlingly frightening David Hunter thriller by Simon Beckett

'A classy debut' The Times 'Best thriller I've read all year' Tess Gerritsen Dr David Hunter hoped he might at last have put the past behind him. But then they found what was left of Sally Palmer . . . It isn't just that she was a friend that disturbs him. Once he'd been a high-profile forensic anthropologist and all too familiar with the many faces of death, before tragedy made him abandon this previous life. Now the police want his help. But to become involved will stir up memories he's long tried to forget. Then a second woman disappears, plunging the close-knit community into a maelstrom of fear and paranoia. And no one, not even Hunter, is exempt from suspicion. Gruesome and gripping, this startling new British crime thriller has an unnerving and original twist.

The Chemistry of Death Reviews

"The best thriller I've read all year... fast-paced, fascinating and heart-stoppingly exciting" -- TESS GERRITSEN
"Spine-tinglingly frightening... it hits the bull's eye from the word go" * INDEPENDENT ON SUNDAY *
"Fresh and original... perfectly captures the claustrophobic horror of a rural community in crisis... absolutely compelling - and deliciously scary" -- MO HAYDER
"Excellent... plotted and written with panache, with high marks for characterisation and shock value... an absorbing, scary tale" -- MARCEL BERLINS * THE TIMES *
"The same rich vein of fatty tissue dissected by Patricia Cornwell... but Beckett does it well; he is a fine writer with a good grip of both the architacture and mechanics of the thriller... a classy debut" * THE TIMES *

Simon Beckett is the No.1 international bestselling author of the David Hunter series: The Chemistry of Death, Written in Bone, Whispers of the Dead, The Calling of the Grave, The Restless Dead and The Scent of Death. His books have been translated into 29 languages, appeared in the Sunday Times top 10 bestseller lists and sold over 10 million copies worldwide. A former freelance journalist, he has written for The Times, Daily Telegraph, Independent on Sunday and Observer. The inspiration for the first David Hunter novel came after a visit to the world-renowned Body Farm in Tennessee introduced him to the work of forensic anthropologists. Joint-winner (with Arne Dahl) of Europe's largest crime fiction prize - the Ripper Award 2018/19 - he has also won the Raymond Chandler Society's Marlowe Award and been short-listed for the CWA Gold Dagger, CWA Dagger in the Library and Theakston's Crime Novel of the Year awards. He is also the author of several stand-alone novels including Stone Bruises and Where There's Smoke. Simon Beckett lives in Sheffield.

GOR001200012
The Chemistry of Death: The skin-crawlingly frightening David Hunter thriller by Simon Beckett
Simon Beckett
Used - Very Good
Paperback
Transworld Publishers Ltd
2007-04-09
448
0553817493
9780553817492
Short-listed for Theakston's Old Peculier Crime Novel of the Year 2008
Book picture is for illustrative purposes only, actual binding, cover or edition may vary.
This is a used book - there is no escaping the fact it has been read by someone else and it will show signs of wear and previous use. Overall we expect it to be in very good condition, but if you are not entirely satisfied please get in touch with us.