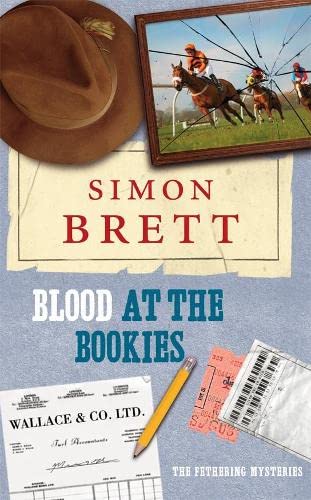 Blood at the Bookies
by Simon Brett

Blood at the Bookies Summary

Blood at the Bookies: The Fethering Mysteries by Simon Brett

All bets are on when there's a body found at the bookies...

When Jude wanders into Fethering's local bookies she has no idea that she will shortly be investigating the murder of Polish immigrant Tadeusz Jankowski.

With her partner in crime, friend and next-door-neighbour Carole, she's determined to discover who killed him - and why? There are several favourites in the running:

* A mysterious woman in the bookies?

* The charming lecturer at the university?

* Or the mysterious attacker who Jude only narrowly escapes from?

Talking to suspects and gathering information, the amateur investigators try to piece together the broken trail of the young immigrant's life. But in this race there's only one winner - and it could be that they are pipped at the post by a cold and calculated killer...

Simon Brett worked as a producer in radio and television before taking up writing full time. As well as the much-loved Fethering series, the Mrs Pargeter novels and the Charles Paris detective series, he has written a number of radio and television scripts. Married with three children, he lives in an Agatha Christie-style village on the South Downs. You can find out more about Simon at his website: www.simonbrett.com

GOR000945530
Blood at the Bookies: The Fethering Mysteries by Simon Brett
Simon Brett
Used - Very Good
Hardback
Pan Macmillan
2008-03-07
352
0230014577
9780230014572
N/A
Book picture is for illustrative purposes only, actual binding, cover or edition may vary.
This is a used book - there is no escaping the fact it has been read by someone else and it will show signs of wear and previous use. Overall we expect it to be in very good condition, but if you are not entirely satisfied please get in touch with us.