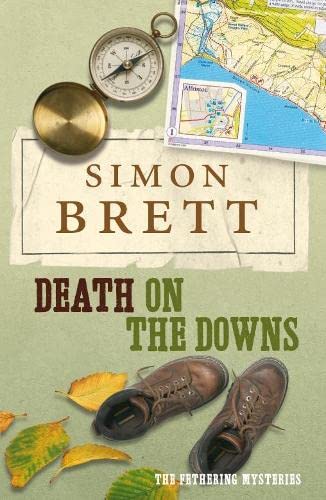 Death on the Downs
by Simon Brett

In Stock
£4.49
In the second novel in the Fethering mysteries, Fethring's own amateur lady detectives must investigate a shocking murder in the shadow of the West Sussex Downs
Very Good Good
Only 4 left

Death on the Downs Summary

Death on the Downs: The Fethering Mysteries by Simon Brett

It wasn't the rain that upset Carole Seddon during her walk on the Downs, or the dilapidated barn in which she was forced to seek shelter. No, what upset her was the human skeleton she discovered there, neatly packed into two blue fertiliser bags . . .

Carole and Jude's enquiries take them to the small downland hamlet of Weldisham and there gossips quickly identify the corpse as Tamsin Lutteridge, a young woman who disappeared from the village months before. So why is Tamsin's mother, a friend of Jude's, so certain that her daughter is still alive?

As Jude sets out to find Tamsin, Carole digs deeper into Weldisham's history and the bitter relationships simmering beneath the village's gentle facade.

'Welcome return for Brett's lady sleuths . . . As crime gets a harder edge, it's refreshing to have an amiable light-hearted tale, which makes the most of wit and atmosphere' Yorkshire Post

Simon Brett worked as a producer in radio and television before taking up writing full time. He is married with three grown-up children and lives in an Agatha Christie-style village on the South Downs. This is the second in the popular Fethering series. The latest novel Death under the Dryer, will publish simultaneously.

GOR001095246
Death on the Downs: The Fethering Mysteries by Simon Brett
Simon Brett
Used - Very Good
Paperback
Pan Macmillan
2007-06-01
352
033044526X
9780330445269
N/A
Book picture is for illustrative purposes only, actual binding, cover or edition may vary.
This is a used book - there is no escaping the fact it has been read by someone else and it will show signs of wear and previous use. Overall we expect it to be in very good condition, but if you are not entirely satisfied please get in touch with us.