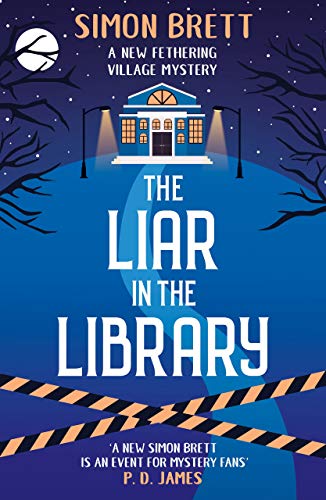 The Liar in the Library
by Simon Brett

Used Price
£6.79
New RRP £8.99
Free Shipping in the UK
In the sleepy, English village of Fethering, an author event at the local library ends in murder and it's up to amateur sleuths Carole and Jude to solve the case
Reviews:
Trustpilot
Very Good

The Liar in the Library Summary

The Liar in the Library by Simon Brett

'A new Simon Brett is an event for mystery fans' P. D. JAMES 'King of the witty village mystery' Daily Telegraph 'Perfect entertainment' Guardian Fethering has everything a sleepy coastal town should: a snug English pub, cosy cottages, a little local library - and the occasional murder . . . Bestselling author Burton St Clair, complete with soaring ego and wandering hands, has come to town to give a talk. But after his corpse is found slumped in his car, he won't be leaving. Jude is the prime suspect; she was, after all, the last person to see Burton St Clair alive. If she is to prove her innocence, she will have to dust off her detective skills and recruit her prim and proper neighbour (and partner-in-sleuthing) Carole to find the real culprit.

Customer Reviews - The Liar in the Library

The Liar in the Library Reviews

A new Simon Brett is an event for mystery fans -- P. D. JAMES
King of the witty village mystery * * Daily Telegraph * *
Crime writing just like in the good old days, and perfect entertainment * * Guardian * *
Few crime writers are so enchantingly gifted... as Simon Brett * * Sunday Times * *
Simon Brett writes the kind of good whodunits that could have been written fifty years ago . . . and he has a sly sense of humour * * The Times * *
One of the wittiest crime writers around -- ANTONIA FRASER
One of the exceptional detective story writers around * * Telegraph * *
Murder most enjoyable . . . An author who never takes himself that seriously, and for whom any fictional murder can frequently form part of the entertainment industry -- COLIN DEXTER
Deftly contrived, light-hearted mysteries * * The Times * *

SIMON BRETT worked as a producer in radio and television before taking up writing full-time. He was awarded an OBE in the 2016 New Year's Honours for services to Literature and also was elected a Fellow of the Royal Society of Literature. In 2014 he won the CWA's prestigious Diamond Dagger for an outstanding body of work. The Liar in the Library is the eighteenth book in the series. simonbrett.com

GOR009707358
The Liar in the Library by Simon Brett
Simon Brett
Fethering Village Mysteries
Used - Very Good
Paperback
Canongate Books Ltd
2019-06-06
192
1786894866
9781786894861
N/A
Book picture is for illustrative purposes only, actual binding, cover or edition may vary.
This is a used book - there is no escaping the fact it has been read by someone else and it will show signs of wear and previous use. Overall we expect it to be in very good condition, but if you are not entirely satisfied please get in touch with us.