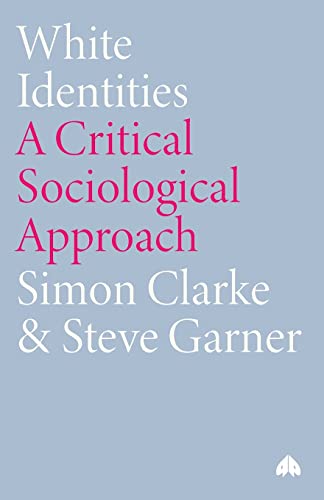 In Stock
£18.99
The argument for the construction of whiteness
Well Read
Only 1 left

This book guides students as they explore how white identities are forged using both sociological and psycho-social ideas.

Whiteness has traditionally been seen as 'ethnically transparent' - the marker against which other ethnicities are measured. Only recently have scholars moved away from focusing on ethnic minorities and instead oriented their studies around the construction of white identities.

Including an excellent survey of the existing literature and original research from the UK, this book will be an invaluable guide for sociology students taking modules in race and ethnicity.

'A brilliantly nuanced analysis of white racial identity in the 21st century' -- Woody Doane, University of Hartford. Co-Editor of White Out: The Continuing Significance of Racism

Simon Clarke is Director of the Centre for Psycho-Social Studies at the University of the West of England. He is author of several books including Social Theory, Psychoanalysis and Racism (Macmillan, 2003), White Identities (Pluto, 2009) and From Enlightenment to Risk (Macmillan, 2005). He is editor of the journal Psychoanalysis, Culture and Society. Steve Garner is Lecturer in Sociology at Aston University. Throughout his academic career he has been engaged with questions such as 'What does 'race' mean?', 'How does racism work?', and 'How can racial equality be achieved?' He is the author of Racism in the Irish Experience (Pluto, 2003), Whiteness (Routledge, 2007) and Racisms (Sage, 2009).

GOR010508257
White Identities: A Critical Sociological Approach by Simon Clarke
Simon Clarke
Used - Well Read
Paperback
Pluto Press
2009-11-05
240
0745327486
9780745327488
N/A
Book picture is for illustrative purposes only, actual binding, cover or edition may vary.
This is a used book. We do our best to provide good quality books for you to read, but there is no escaping the fact that it has been owned and read by someone else previously. Therefore it will show signs of wear and may be an ex library book.