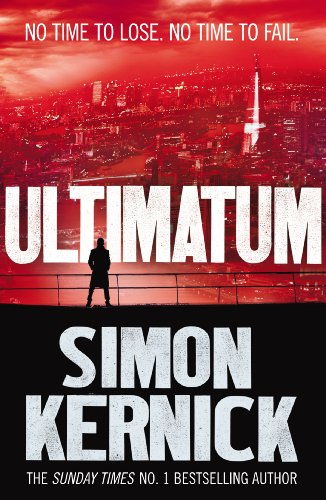 In Stock
£4.49
THE THREAT8am: an explosion blasts through a cafe in Central London.THE CLOCK IS TICKINGIt's a terrifying race against time for DI Mike Bolt and DC Tina Boyd as they chase their targets across the city in a desperate bid to stop a major atrocity - before it's too late ...
Very Good Good
8 in stock

THE THREAT 8am: an explosion blasts through a cafe in Central London. THE ULTIMATUM Minutes later, a call from an unknown terror group warns that a far greater attack will be launched in 12 hours' time. THE PRISONER William Garrett, AKA Fox, is awaiting trial for mass murder. He claims he can name the bombers. But only at a price. THE CLOCK IS TICKING It's a terrifying race against time for DI Mike Bolt and DC Tina Boyd as they chase their targets across the city in a desperate bid to stop a major atrocity - before it's too late ...

"More gripping than Action Man's hands" * Mail on Sunday *
"As ever, Kernick's research is impeccable. The plotting is brilliant and makes for a tense, action-packed read" * Sunday Mirror *
"Another Kernick cracker; he never lets you down" * Sunday Sport *
"Kernick delivers his book like a runaway locomotive without brakes. This is another cracking read from a great author." * www.crimesquad.com *
"Pace, pace, pace is what Simon Kernick does best." * Daily Mirror *

Simon Kernick is one of Britain's most exciting thriller writers. He arrived on the crime writing scene with his highly acclaimed debut novel The Business of Dying, the story of a corrupt cop moonlighting as a hitman. Simon's big breakthrough came with his novel Relentless which was the biggest selling thriller of 2007. His most recent crime thrillers include The Last Ten Seconds, The Payback and Siege. Simon talks both on and off the record to members of the Met's Special Branch and the Anti-Terrorist Branch and the Serious and Organised Crime Agency, so he gets to hear first hand what actually happens in the dark and murky underbelly of UK crime. To find out more about his thrillers, visit www.simonkernick.com; www.facebook.com/SimonKernick; www.twitter.com/simonkernick

GOR004677561
Ultimatum: (Tina Boyd 6) by Simon Kernick
Simon Kernick
Tina Boyd
Used - Very Good
Paperback
Cornerstone
2013-06-06
448
0099579065
9780099579069
N/A
Book picture is for illustrative purposes only, actual binding, cover or edition may vary.
This is a used book - there is no escaping the fact it has been read by someone else and it will show signs of wear and previous use. Overall we expect it to be in very good condition, but if you are not entirely satisfied please get in touch with us.