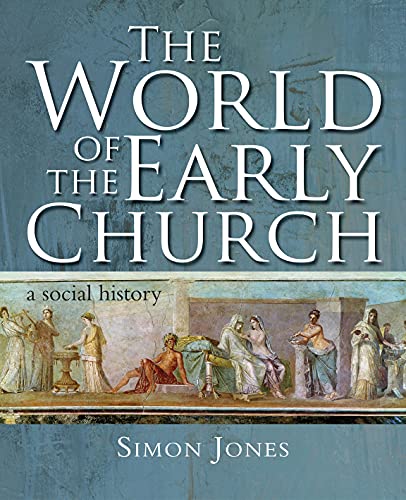 The World of the Early Church
by Simon M. Jones

In Stock
£14.99
A vivid picture of what Roman life was like for ordinary people
Very Good
Only 1 left

The World of the Early Church Summary

The World of the Early Church: A social history by Simon M. Jones

The Roman world formed the social and cultural backdrop to the emergence of the Christian movement, which has influenced so deeply the world we live in today. So what was it like for ordinary people? Where did they live? What work did they do? What did they do in their free time? How did they understand their place in the world, in relation to others and, very importantly, the gods? And, significantly, how was it that a rural Jewish renewal group became one of the fastest-growing urban movements through the first century and beyond?

The World of the Early Church Reviews

"We all know that the New Testament was written some time in the past but it can be hard to get a handle on just what that particular bit of the past was like. Simon Jones's book offers an engaging, helpful way in. He draws on the latest research, uses plenty of archaeological and textual detail, and still manages to put things across in a way that is easy to understand. The book will open your eyes to the strange and fascinating world of the first Christians." PETER OAKES, Greenwood Lecturer in New Testament a the University of Manchester, author `Reading Romans in Pompeii' -- Peter Oakes
"Based on solid historical scholarship and original research, Simon Jones has produced a readable and informative account of everyday life in the Roman empire that brings alive for today's readers the social contact in which the first Christians worked out their faith." JOHN DRANE, Fellow of St John's College, Durham, and adjunct professor at Fuller Theological Seminary, California. -- John Drane
Thus, the reader of The World of the Early Church walks away from the book with a greater understanding of the first century Greco-Roman world, and therefore with a greater knowledge of the Scriptures that came from that world, so distant from our own. -- Matthew R. Crawford * Churchman *

Simon Jones was a financial journalist before being appointed Editor of Christianity, and is now minister of Bromley Baptist Church. He has written seven books, mainly for ivp, including Discovering the New Testament and Why Bother with Church, the latter being the inspiration behind his current field of study. He has taught on the social history of the New Testament in Sri Lanka and Prague as well as at Spring Harvest and in his own church, and published articles in this area.

Contents: Begins Here... 1. An Urban Movement 2. The Homes People Lived in 3. All in a Day's Work 4. Bread and Circuses 5. A Place in the World 6. Family Life 7. Making Ends Meet 8. A Supermarket of Faiths

GOR003649267
The World of the Early Church: A social history by Simon M. Jones
Simon M. Jones
Used - Very Good
Hardback
Lion Hudson Plc
2011-03-18
192
0745955002
9780745955001
N/A
Book picture is for illustrative purposes only, actual binding, cover or edition may vary.
This is a used book - there is no escaping the fact it has been read by someone else and it will show signs of wear and previous use. Overall we expect it to be in very good condition, but if you are not entirely satisfied please get in touch with us.